The new Yamaha YZF-R15 M will be offered with a slew of design and styling upgrades, along with a higher-spec suspension kit.The new YZF-R15 M is likely to go on sale in India later this year.
By : HT Auto Desk
| Written By : Prashant Singh
| Updated on: 26 Aug 2021, 16:58 PM 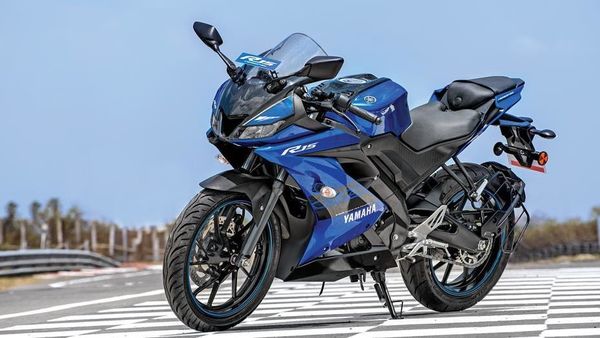 The third generation of the Yamaha YZF R15 was introduced in India a few years back. (Representational Image)

Apart from the Aerox 155 moto-scooter inspired by the YZF-R15, Yamaha Motor India also has an updated R15 in the pipeline that will be called the YZF-R15 M. The new motorcycle will be offered with a slew of design and styling upgrades, along with a higher-spec suspension kit. Here's all we know about the upcoming new Yamaha YZF-R15 M.

On the outside, the new motorcycle will feature a completely new single-pod headlight with LED DRLs at the front. This setup looks inspired by the new YZF-R7 supersport bike that was globally revealed a few months back. In addition, the bike will also feature fairing-mounted rear-view mirrors. Other design highlights of the new bike will include a muscular fuel tank that gels in with a split-style saddle, a side-slung exhaust and a sleek taillight.

As suggested by the past spy images, the motorcycle will be offered with a complete set of all-around LED lighting. It will get a projector-style headlight, LED DRL, and an LED taillight. Also, the new R15 M is expected to sport Bluetooth connectivity features with Yamaha Y-Connect App that will unlock smart features such as call alert, SMS/email notification, details about phone battery level, fuel consumption data, maintenance recommendation, and last parked position.

One of the biggest updates on the new model will include its upside-down front forks which will replace the conventional telescopic front forks on the existing model. For braking, the bike will use single discs on both wheels. The brakes will function along with dual-channel ABS.

At the heart of the bike will sit the same 155cc, single-cylinder, liquid-cooled engine that will be responsible for delivering about similar output in comparison to the current model.