Royal Enfield announced its one-make championship in India last year. The Continental GT-R650 has been built specifically for this event.
By : Prashant Singh
| Updated on: 23 Apr 2022, 15:49 PM

The Royal Enfield Continental GT-R650 is 20-22 kg lighter than the stock bike.

Royal Enfield goes racing! Well, it is not every day that a retro cruiser maker decides to put on race leathers and go apex hunting. The year 2021 was full of revelations and the Bullet-maker had a big surprise incoming when it announced its one-make championship in India last year. While I missed the opportunity to witness the very first round of the championship, I did make it to the last round when Anish Shetty was declared victorious for season one. With this event, the company aims to promote ‘retro racing’ in India and in the process also train new and experienced racers.

The very first question that popped in my mind when I heard about the Continental GT-R650 (the race-spec Continental) was how exactly will it perform on a race track such as KARI which is a very technical track, especially if you have a mammoth that weighs almost 200 kg to swing around on. But to my surprise, the GT-R650 was a delight. How exactly? Read on to know.

Needless to say, the standard Continental GT 650 sold to the customers isn't exactly race-ready. While it sure has the torque-monster 650 cc parallel-twin, to race on triple-digits, hitting apex all day long, the company made some notable changes to make the bike quicker around a race track. All the updates done were limited only to cycle part equipment and none to the powertrain. So in essence, the heart of the GT 650 remained untouched.

For starters, the GT-R650 is 20-22 kg lighter than the stock bike which takes its wet weight to be around 178-ish kg. And that is huge by all standards. Well, the majority of the weight is saved by replacing the stock exhaust with a new free-flow, race-spec unit which is not just lighter but adds a few horses over the stock's 47.6 PS. And on the top, it sounds like an absolute maniac. As if the stock bike doesn't already sound ridiculously good, the new exhaust takes the level a notch higher by adding 2x the base. 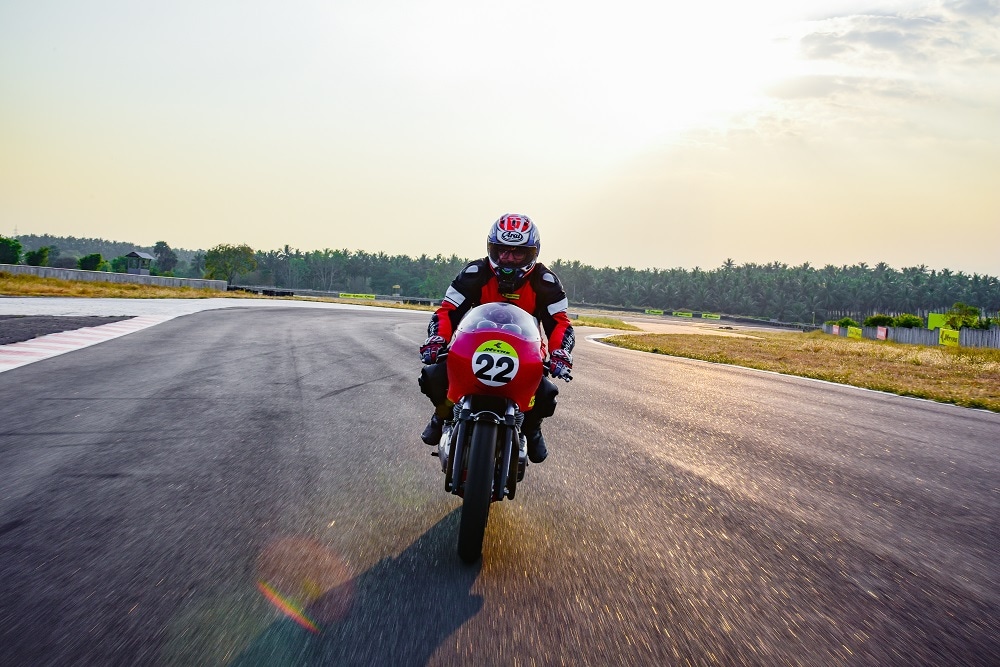 Quick revving twin rockets the bike to triple digit speeds in no time, and stickier rubber (although just 130 mm rear) lends it much needed grip around the corners.

And then comes updates such as re-sprocketing (front) with one less tooth, sportier set of footpegs, stickier tyres, stiffened suspension, shorter rear subframe (mainly for cosmetics), and of course lowered handlebars for an aggressive stance.

I'll admit not having enough previous experience of the stock GT650, but as soon as I stepped on the race-spec model, I knew it felt roomy. While the handlebar positioning sure felt a bit too sporty but there was enough space around the saddle to get in the comfort zone.

Smash the 1st gear down and the bike picks up pace in no time, and how quickly it reaches the red line is unbelievable. For the first few laps, I red-lined on almost all gears, because it was so ridiculously easy.

The KARI race track was remodeled a year back, while previously it was infamous for being too technical (and short), the new version kept on getting better the more time I spent on it. I gave a few laps to connect with the bike and the new track too, but only a few minutes in, and the sync settled in. Quick revving twin rocketed the bike to triple-digit speeds in no time, and stickier rubber (although just 130 mm rear) gave the bike much-needed grip around the corners.

The absolutely incredible and well-balanced chassis on the GT-R650 showed what it is capable of, especially when sticking to the lines. And the bike handled as if it was my own extension. I remember going easy on turns initially, but I soon realised that the tyres can take greater leaning angles than that, and I was scraping the hell out of the suit's knee pads. And yes it felt incredibly cool on a retro racer. 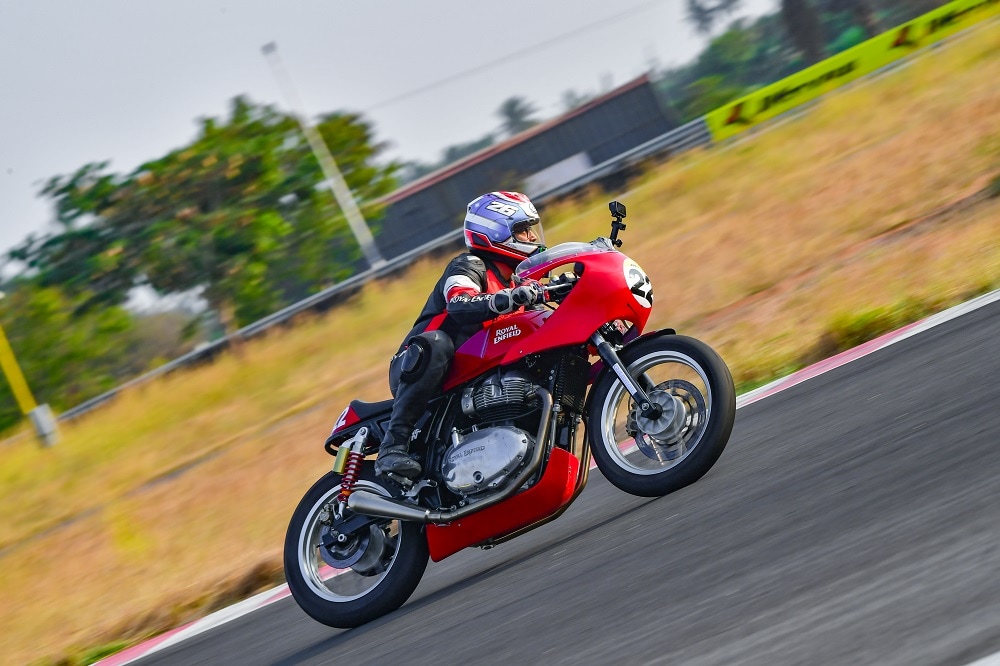 Losing all the weight didn't exactly make the GT-R650 a completely light machine to ride, but yes it did bring along a huge difference.

However, I experienced the bike to be hitting the limiter too often, sometimes even mid-corners. And I did change the gears many times mid corners, which I wish I didn't do. But to my surprise, upshifting around a corner wasn't as dramatic as it may sound thanks to the low-end torque which kept the momentum up and me from smacking into the ground.

I wouldn't say losing all the weight made the GT-R650 a completely light machine to ride, but yes it did bring along a huge difference, to say the least. Diving into the corners was definitely easier and less demanding while maintaining the same amount of high-speed stability. And the cherry on the top is its braking that takes care of everything even if you are going way beyond the track's limits. Also not to forget, the stiffer suspension setup takes care of the compression at the front end when slamming the brakes hard, which in return also allows the rider to carry over faster corner speeds. 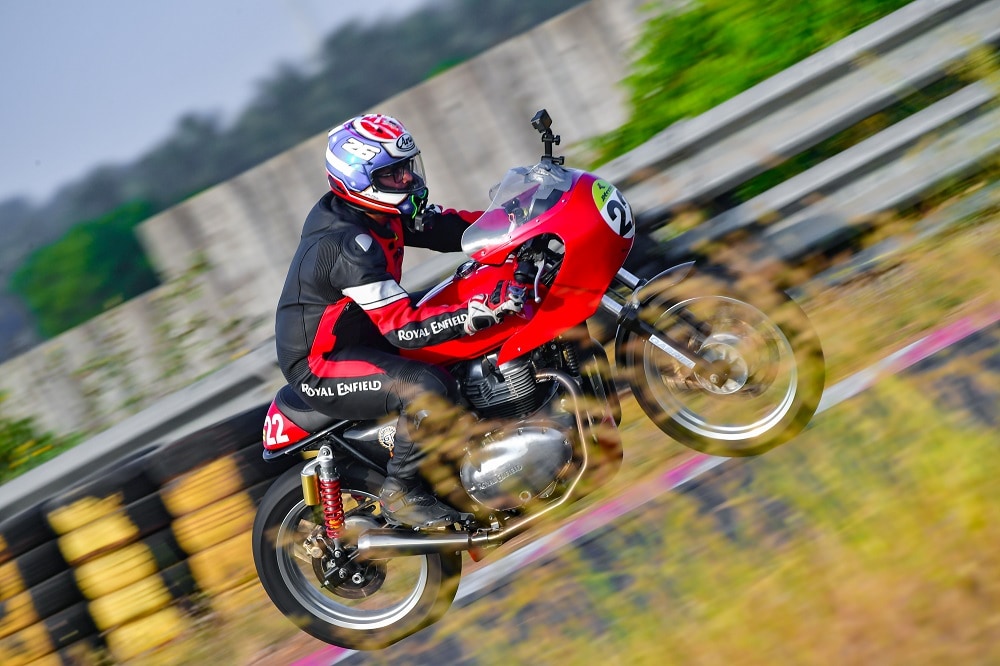 Diving into the corners is definitely easier and less demanding, while maintaining the same amount of high speed stability.

Riding the Royal Enfield Continental GT-R650 on a track like KARI was definitely a bucket list experience. And seeing how impressive it has become especially from a point of view that only pursuits speed, the GT-R 650 is an emotion. Sadly, it can only be experienced if you participate in the next One-make race championship and can not be bought.