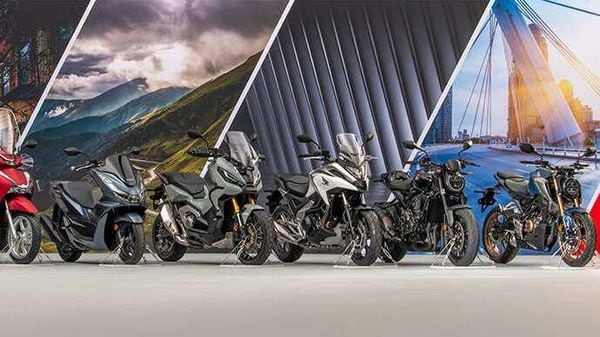 Honda has announced its new lineup of two-wheelers for the European market.

Japanese two-wheeler manufacturer Honda Motor has revealed its 2021 lineup for Europe, that includes a black edition of the India-bound CB1000R motorcycle as well. Honda Motor has planned to upgrade as many as six models and one new model for next year.

Among technical updates, Honda will revise its 350cc bike SH350i and replace the SH300i as the top of the lineup. It will also see improved breathing and cooling, sharper acceleration and top end power. The SH350i will also feature a new LCD meter and muscular new design lines.

Honda PCX125, one of the most popular scooters in Europe, will also get a more powerful and fuel efficient eSP+ four valve water-cooled engine that now features Honda Selectable Torque Control (HSTC). Besides the new engine, the PCX125 Will also get a completely new bodywork, flowing back from the redesigned LED headlight, complete with signature running lights, to the X-shaped rear. It will also have increased underseat luggage space (30.4 litres) and a USB charging port.

Following the new color schemes announced earlier this year for the CB500X and CRF1000L Africa Twin, the other two Honda machines in Europe’s top ten best-selling ‘on-off’ motorcycles - the NC750X and X-ADV - receive comprehensive updates for 2021. The Neo Sports Cafe range brought a fresh identity to Honda’s naked motorcycle line-up in 2017, with a unique mix of cafe racer inspiration and a forward-looking ultra-minimalist look.

Following the upgrades already announced for the CB650R middleweight, two more members of the family are now significantly revised for 2021.

The flagship of the Neo Sports Cafe range, the CB1000R, will be updated with new ‘hunched forward’ styling. The signature round headlight, now housed in a teardrop-shaped surround, is now angled backwards, sending the eye back past the smaller side shrouds to the redesigned upward-slanting rear subframe.

The 2021 CB125R will feature a new 4 valve liquid-cooled engine, which now delivers an extra 1.2Nm torque. In a world’s first for a 125cc motorcycle, the CB125R is now fitted with Showa’s ‘Separate Function front fork Big Piston’ (SFF-BP) USD forks as standard.