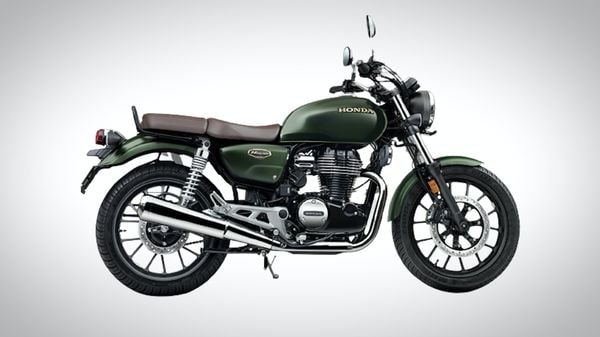 Honda has launched anniversary edition of the H'ness CB350 motorcycle in India at a price of ₹2.03 lakh (ex-showroom).

Honda had launched the original H'ness CB350 motorcycle in India in October last year. A direct rival to the likes of the Royal Enfield Meteor 350 and the motorcycles from Jawa, the H'ness CB350 is available in two trims - DLX and DLX Pro. While the former is priced at ₹1.85 lakh, the higher-spec trim costs ₹1.90 lakh (ex-showroom). Honda said that it has already sold 35,000 units of the motorcycle since its launch last year.

The anniversary edition of the Honda H’ness CB350 is not too different from the original edition, barring a few special cosmetic changes to show. The motorcycle gets gold badging on the fuel tank as well as the side panel. There is an anniversary edition logo which is placed on top of the fuel tank in a pin-striped fashion. There are also brown coloured dual seat and chrome side-stand. The Crown Handle synchronised with different colour options maintains its rugged look.

Atsushi Ogata, President and CEO at Honda Motorcycle and Scooter India, said, “Celebrating the love & trust of customers since its launch in the Indian market, the anniversary edition of H’ness CB350 will showcase the pride of its rider’s community."

Yadvinder Singh Guleria, Director of Sales and Marketing at Honda Motorcycle and Scooter India, said, ‘Taking forward our CB legacy, all new H’Ness CB350 was globally unveiled in India last year. At IBW, it is the debut appearance of H’Ness and we are glad to see the amazing welcome from the riding community. Today, we celebrate this tremendous response by thanking our customers and announcing the launch of H’Ness Anniversary Edition which will inject new excitement among H’ness enthusiasts."

The Honda H’ness CB350 Anniversary Edition will be powered by the same 349 cc, single-cylinder, air-cooled engine that is used in the original version. The engine is capable of churning out maximum output of 20.8 bhp at 5,500 rpm and 30 Nm of peak torque at 3,000 rpm. The engine is mated to a 5-speed gearbox which can be accessed via a slipper clutch with an assist function which requires less load on the clutch lever, compared to a regular clutch.