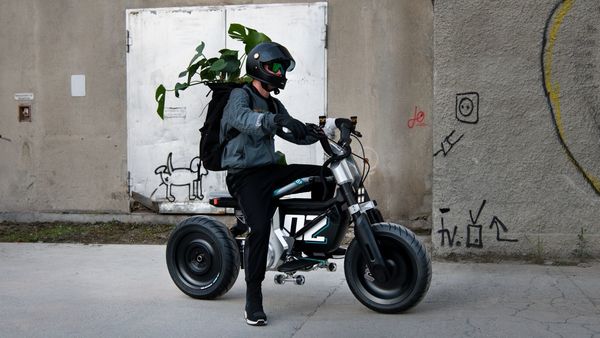 BMW Motorrad Concept CE 02 e-bike comes with a truly unconventional design that is inspired by skateboards.

BMW Motorrad has unveiled its Concept CE 02 electric bike. The e-bike comes with a design that looks heavily inspired by the skateboard. The German premium two-wheeler major under the BMW Group umbrella claims that this e-bike concept is targeted at Generation Z consumers.

The design of the BMW Concept CE 02 e-bike looks like a combination of a toy bike with an electric powertrain. The two-wheeler manufacturer claims that it has been developed for anyone who likes to be mobile and independent. Also, the company describes the e-bike concept as a skateboard on wheels.

The official description of the e-bike clearly indicates that the Concept CE 02 has been developed for young buyers who would like to own a machine that is not just a medium of commuting but gives freedom of stunts as well.

The sporty concept e-bike comes with a very minimalist footprint and a low centre of gravity. The company claims that it has been designed with emotional elements and the most of all, keeping a focus on riding fun.

At one glance, it looks like a toy bike. The handlebars don't get the conventional roundish look but come with a flat appearance. There is a compact and small digital display neatly tucked at the front. Instead of a conventional headlamp, it gets a quad-LED setup providing the required illumination, positioned at the top of the front mudguard between the telescopic forks. The button console at the right handlebar gets touchpads instead of standard buttons.

In place of the standard fuel tank, there is a flat metal plating that looks like to have taken inspiration from a skateboard. It blends perfectly with the platform that acts as a seat. The sleek LED strip acting as taillights is neatly tucked inside the seat.

The seat has been designed to give the rider freedom to ride the e-bike in an upright or leaning forward position. In between the free space between the seat and the frame is space to keep small things secured by elastic bands. Also, the bracket under the batteries stores a skateboard and doubles as a footrest.

The wheels don't get any conventional spoke design. Instead, they are solid black material and wrapped with chunky tyres.

The CE 02 e-bike comes powered by an 11 kW belt-driven motor. It helps the motorcycle to run 90 km on a single charge at a top speed of 90 kmph. BMW Group claims that the bike weighs 265 pounds in total which is lightweight and manoeuvrable for city riding fun.

This concept e-bike certainly looks unconventional and radical if we compare it with the standard electric two-wheelers around us. However, the production form of this model is likely to come in a more civilized version.