Mahindra XUV400 is yet another exciting prospect in the Indian world of electric vehicles. But the company is still fine-tuning a lot of elements on the EV before its January launch.
By : HT Auto Desk
| Updated on: 12 Sep 2022, 09:50 AM
Mahindra XUV400 EV is set for its official launch in January of 2023.
View all Images

1/15
Mahindra XUV400 has been unveiled to the world as an all-electric passenger vehicle. Essentially based on the XUV300 sub-compact SUV, this EV is longer and is free from emissions.

3/15
While it does look largely similar to the XUV300, the Mahindra XUV400 has several design updates on its exterior profile.

4/15
XUV400 gets a closed grille with the new Twin Peaks logo in the middle and in a shade of bronze. The headlight unit with the DRLs have been largely carried forward.

5/15
The front fog lamp housing is now bigger and there are more bronze elemental additions here and on the side and roof. The windows, character lines and the 16-inch alloy wheels are near identical to the XUV300.

6/15
From the rear too, the XUV400 is nearly identical to look at as the XUV300, apart from a slight redesign touch to the tail lights.

7/15
The charging socket is located on the front left side of the Mahindra XUV400.

8/15
The Mahindra XUV400 gets a 39.4 kWh battery pack which is IP67 certified for protection against water and dust.

10/15
The seven-inch infotainment screen could have been slightly bigger while the layout of the buttons are a bit mundane. Ford EcoSport, anyone?

12/15
Cargo space inside the Mahindra XUV400 is also generous.

14/15
Mahindra claims a per-charge range of 456 kms but in real world conditions, this figure is likely to be lesser as is the case with all EVs. Using a 7.2 kW AC charger, the XUV400 can be charged to full in around 6.5 hours. This is just 50 minutes if a 50 kW DC fast charger is used.

15/15
XUV400 is looking at making petrol pump stations obsolete for its customers. The official launch of the EV - pricing, bookings and deliveries - will take place from January of 2023 onwards.

Mahindra's electric ambitions for India's mass-market passenger vehicle (PV) segment has been no secret. Although the electric dreams may have been overshadowed these past few years by a troika of big and boisterous - and diesel guzzling - SUVs, the Mahindra EV was always around the corner. Showcased for the first time as the eXUV300 at the Auto Expo back in 2020, it was eventually revealed that the so-called new model would be christened as Mahindra XUV400. And with eyes firmly set on Tata Motors who enjoy a T-Rex share of the EV pie in the country, the XUV400 was unveiled with typical fanfare earlier this week on World EV Day.

With the XUV400, Mahindra confirms it is targeting a select group of ‘conscious’ and ‘enlightened’ buyers across age brackets. The car maker also continued to underline its continued emphasis on big SUVs and repeats the XUV400 is a C-segment SUV contender, a segment that otherwise has the likes of Hyundai Creta, Kia Seltos, Tata Harrier, MG Astor, Volkswagen Taigun and Skoda Kushaq - yes, all engine-powered models. On paper then, the Mahindra XUV400 is gearing up for a battle against an army of rivals even if its main competitors would likely be the Tata Nexon EV Max and MG ZS EV. How does the XUV400 stand up against these options?

We were at the Mahindra SUV Proving Tracks (MSPT) recently to check the XUV400 out - from the outside, within and on the move. And while around 90 minutes isn't nearly enough for an exhaustive take on any car, there were some key takeaways.

How does the Mahindra XUV400 look?

This here is a Mahindra XUV300 given some very lightning updates on the outside to stamp its electric credentials. The differences between the XUV300 and XUV400, if and when compared to the differences between Nexon and Nexon EV, are more substantial and yet, this is still nearly the same model at first and first few glances.

The front face now has a closed-off grille because there's no cooling requirements on an electric vehicle. The Mahindra ‘Twin Peaks’ logo in bronze finds a place right in the middle while the head light with DRLs are identical to the set up on the XUV300. The fog lamp housing lower down is larger and gets bronze outline but there's no DRL here. The bumper is slightly wider for a better face proportion. 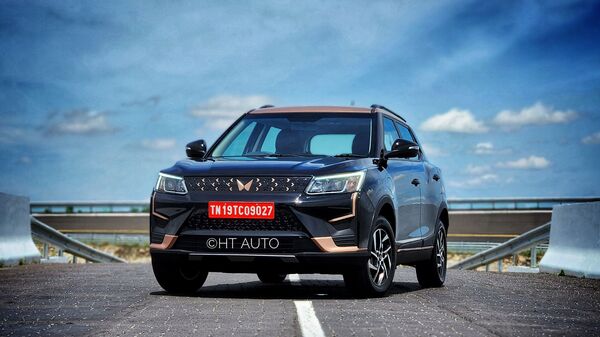 While it does look largely similar to the XUV300, the Mahindra XUV400 has several design updates on its exterior profile.

From the side and the rear, the XUV400 is clearly a twin of the XUV300 with identical window lines, identical 16-inch alloy wheels, same character lines on the body and same rear bumper. The only creative update is a slight design tweak on the tail lights, hardly enough to distinguish it though.

The main update on the XUV400, however, comes in the form of its dimensions. With no tax incentives for EVs shorter than four meters in length, Mahindra has stretched the XUV400 from almost all directions. This helps the EV on two main counts - more space on the inside and a slightly more solid road presence when compared to XUV300 and in fact several of the other EV models already available at present.

The XUV300 is a smart-looking SUV and so is the XUV400. But much like how Nexon EV deserved some big-ticket design updates over the Nexon, so does the XUV400 if put forth as an entirely new model. For now though, it is a new wine in a largely similar bottle.

What is the Mahindra XUV400 like on the inside?

The Mahindra XUV400 cabin has some lofty positives and some very sorry negatives. It is not everyday that a car's interiors has us cheering and cursing all together but this was that day. 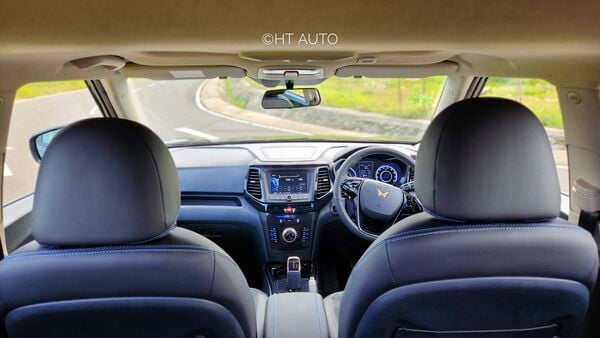 A look at the dashboard layout inside the XUV400.

The Mahindra EV benefits enormously from its stretched proportions and now offers a whole lot of space on the inside. Rear-seat passengers have impressive amounts of leg space, knee room and even the head room is quite adequate. Three on the back seat may still jostle for some personal space but while the absolutely cramped boot space of the XUV300 was a major drawback, there's absolutely no need to plan packing processes for the XUV400 because of its generous cargo space.

The ride and drive height is decently high and the cabin continues to have an airy feel courtesy the large windows and the sunroof above. The center console has been done in a piano black finish while the black leatherette seats with blue stitching looks good.

But the creativities end around here. The cabin of the XUV400 can be described best as one that is bland and archaic in equal measure. The central display unit on the dashboard is a reminder from early days of the Ford EcoSport, complete with all the button layout. The seven-inch screen itself is letdown because of its small size and because it was in Beta phase, we weren't able to test it out enough to form a more detailed opinion.

The digital driver display is bright and has a lot of interplay of colours with data. But Mahindra, very strangely, kept the information of charge remaining switched off. This would have been crucial to assess that claimed 456 kms range on the move even if we were only going to a drive a small fraction of it on the track.

In terms of features, the XUV400 lacks quite a bit with no rear AC vents and no rear charging points and no seat ventilation anywhere. Instead, Mahindra is pointing to things like front and rear-seat armrests, six-way manually adjustable driver seat and a large glove box as some of the starry highlights. Good? Yes. Great? Hardly.

How does the Mahindra XUV400 drive? 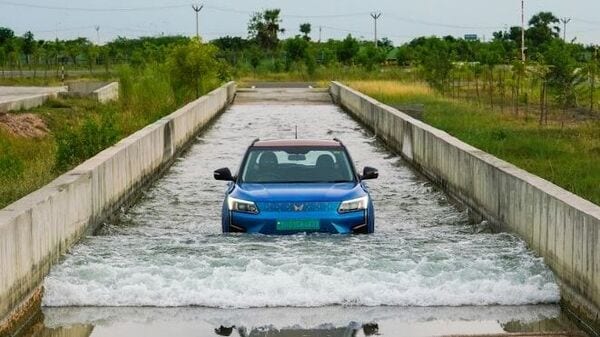 The Mahindra XUV400 gets a 39.4 kWh battery pack which is IP67 certified for protection against water and dust.

The real world range for the XUV400 is likely to be lesser as it is for all EVs but as mentioned previously, it is unfortunate we were unable to get even an iota of an idea due to the battery level indicator being turned off on all test units.

But if a fun drive minus range concerns is what one is after, the XUV400 has plenty of it. There is 148 bhp for the taking and 310 Nm of torque on offer, and these were amply evident on the high-speed test track at MSPT. We even put the claim of 0-100 kmph in 8.3 seconds to the test and the XUV400 is quite fearless in hurtling forward. Fearless because that's actually the name of one of three drive modes; the others are called Fun and Fast. In Fearless mode, there's no traction control as such which means a lot of wheelspin. But the company is going to make traction control standard on the launch models. And so that's that. For all practical purposes though, the Fast mode - the default - is quite capable as well with a burst of torque kicking in when you want it too.

In fact, the XUV400 benefits big time from ample power, excitable torque and great high-speed stability. Even as 150 kmph, the steering was rock steady which is splendid considering how light it otherwise is. And when things are slowed down substantially, it is the same light steering which makes easing into corners quite easy.

Not much point going into the suspension part of the XUV400 as test tracks can't provide a fair assessment but body roll was fairly under control during our brief run with the EV. The only thing Mahindra ought to work on though is the NVH level as much of the tyre and ambient noise filters inside the cabin.

It isn't exactly possible to pronounce a verdict for the Mahindra XUV400 based on a short drive stint inside a controlled track environment. But initial impressions of the XUV400 are fairly decent as far as the performance and drive credentials are concerned. But Mahindra ought to have put in more work in uplifting the cabin and feature list while taking a step or two more in terms of the exterior design elements.

Much would depend on how XUV400 is priced once it is officially launched in January of 2023. Bookings and deliveries would also begin thereafter. I am hoping Mahindra can spring a surprise in terms of pricing which would camouflage its sore points and elevate its positives. But from all indications, I am sticking my neck out to predict a ₹20 lakh price sticker.

Now you can buy Ather 450X Gen3 through Flipkart