The 2022 Lexus NX 350h is a confident foray into the luxury SUV segment dominated by the Germans. While there is a price bump up, the updates are quite significant.
By : Shubhodeep Chakravarty
| Updated on: 21 Mar 2022, 10:00 AM
2022 Lexus NX 350h comes with a slew of updates on its exterior styling, cabin feature list and with a hybrid motor.
View all Images

2/8 The new Lexus NX 350h features a new set of integrated DRLs in the single-piece LED headlamps, new LED taillights which are connected by a light bar, and a U-type pattern for the spindle grille which has grown larger in size.

3/8 The 2022 Lexus NX 350h is available in a variety of fresh NX colours, including Madder Red and Sonic Chrome. For colours exclusive to F Sport models, the palette includes White Nova and Heat Blue.

6/8 In its refreshed form, the Lexus NX 350h also gets the hybrid powertrain. Lexus says that the hybrid unit is self-charging without the worry to plug it in every time to recharge. It offers an electric-only range of around 55 kms.

7/8 The 2022 Lexus NX 350h is powered by 2.5-litre four-cylinder naturally aspirated petrol engine and is paired to an electric motor. The engine can generate an output of 192 hp. The combined output of the petrol and the hybrid unit is 244 hp in all-wheel-drive. The engine comes mated to a 6-step e-CVT transmission.

Lexus NX 350h was first launched in the country back in 2018 but for all its credentials as one of the best-selling Lexus models in the world - over a million units have been sold in 95 countries, failed to make a solid mark in its segment. Competing with some extremely strong rivals like the Mercedes-Benz GLC, Audi Q5, BMW X3 and even the Volvo XC60, after all, was never going to be an easy ask. But easy isn't what Lexus is going for in its stoic attempt at once again propping the NX 350h as a worthy player. Launched with a whole gamut of design, feature and engine upgrades earlier this month, the Lexus 350h is perhaps the biggest bet by the Japanese car maker to establish a firm foothold in the Indian luxury car space.

Lexus, as a brand, has been a niche. Its models are primarily targeted at the discerning buyers, buyers who go in knowing exactly what the priority list looks like. Mostly, it isn't perhaps about pitting one product against the other. It is the sheer refinement, a microscopic attention to detail that often appeals above all else. But in the Indian luxury car space, small as it may be compared to western or Chinese markets, volumes still matter.

So how does a brand like Lexus manage to walk the very fine line between remaining rather exclusive and still bringing more and more people here under its fold? Say hello to the 2022 Lexus NX 350h.

Here's an in-depth look at the latest Lexus NX 350h:

The Lexus NX 350h is perhaps the sportiest looking SUV in its segment. And while looks are often subjective and the beauty is in the eyes of the beholder, it would be quite hard to argue against the sheer visual prowess of this machine.

The trademark Lexus spindle grille on the front is now bigger than it was in the outgoing model and has new U-shaped patterns to give it a three-dimensional appeal. It also now has larger openings at the bottom which, while being part of the design philosophy, also helps with better cooling. The front air intakes on either side have also been reworked and also helps with enhanced cooling. In fact, there is an emphasis on functional design language that is found all around, including the four-part projector head lights with L-shaped DRLs and an adaptive High-Beam system. And if all of these aren't impressive, the NX 350h also gets fade-in illumination control, a Lexus first. 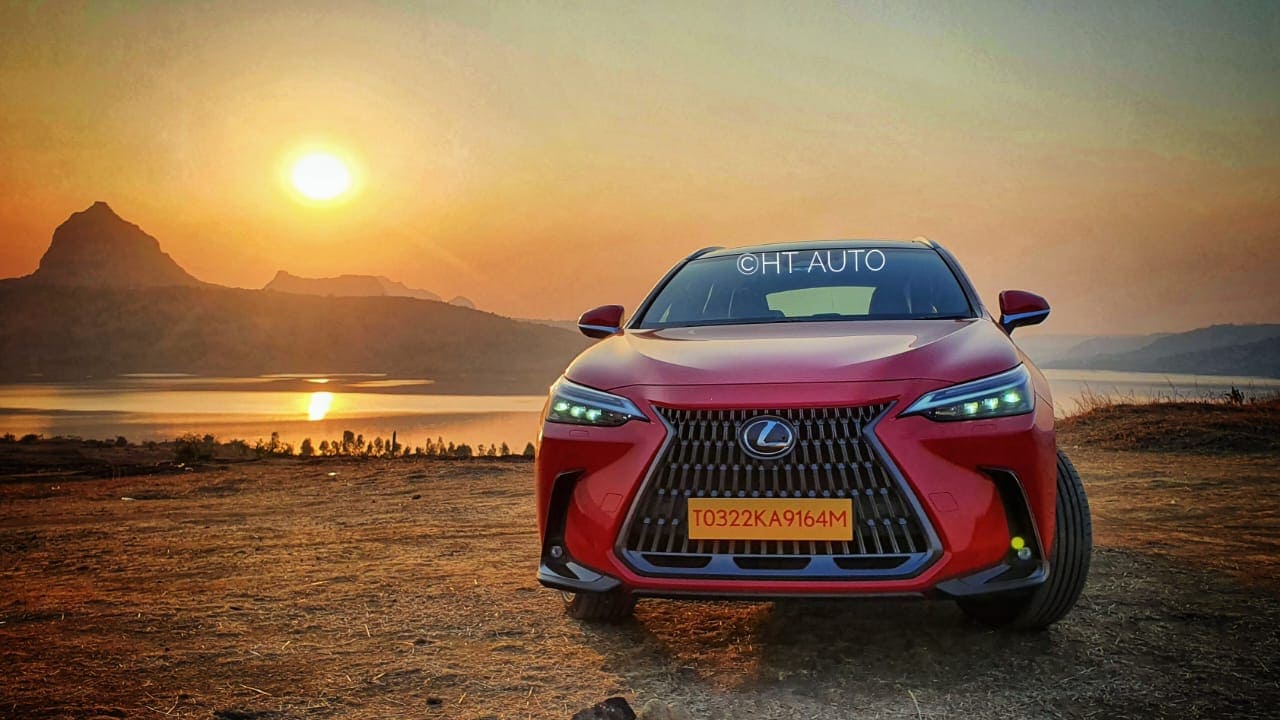 A larger spindle grille on the face of the latest NX 350h gives it a more pronounced appearance.

On the side, the SUV stands on 20-inch wheels and has character lines beginning from the front fender and extending all the way to wrap around the tail gate. The window outline is done in chrome and the aerodynamic profile is very, very evident. 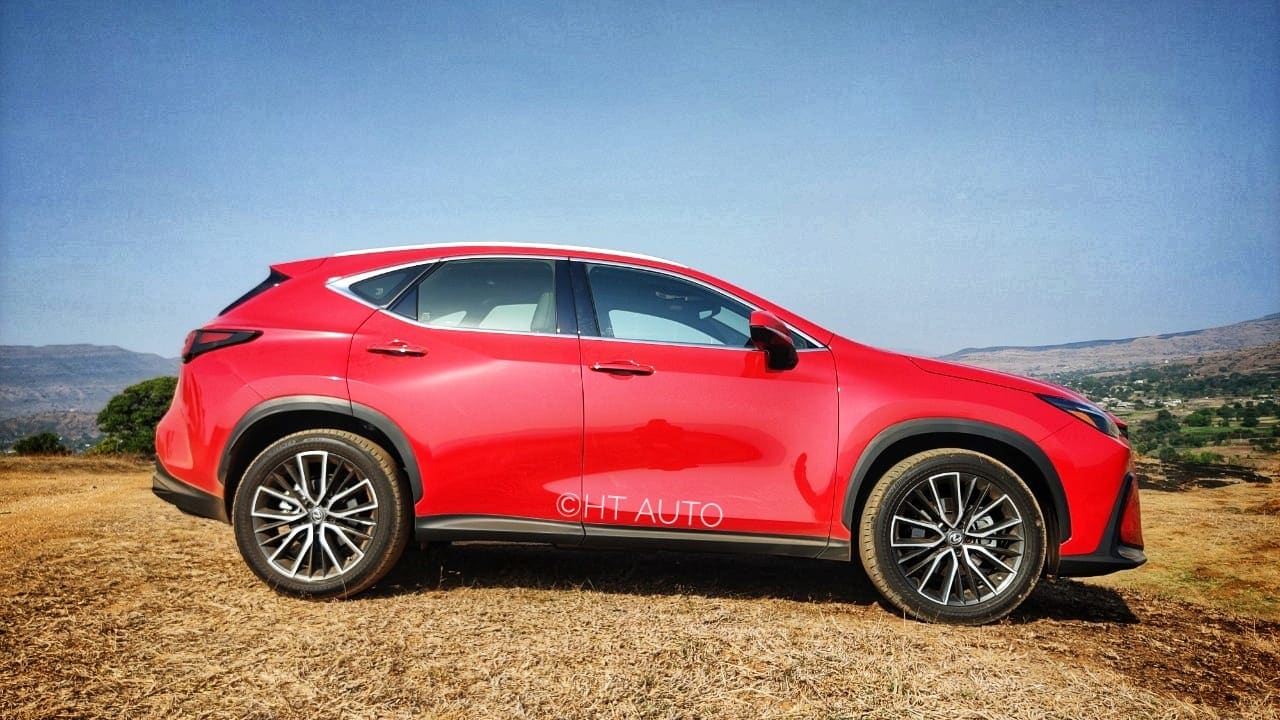 The Exquisite and Luxury variants of Lexus NX 350h gets two-tone dark grey metallic alloys (in pic) while the F Sport gets the alloys in metallic black.

The rear profile also has sharp-looking LED tail lights and an LED bar light propped slightly higher up between the two. The ‘Lexus’ and ‘NX 350h’ lettering completes the look. 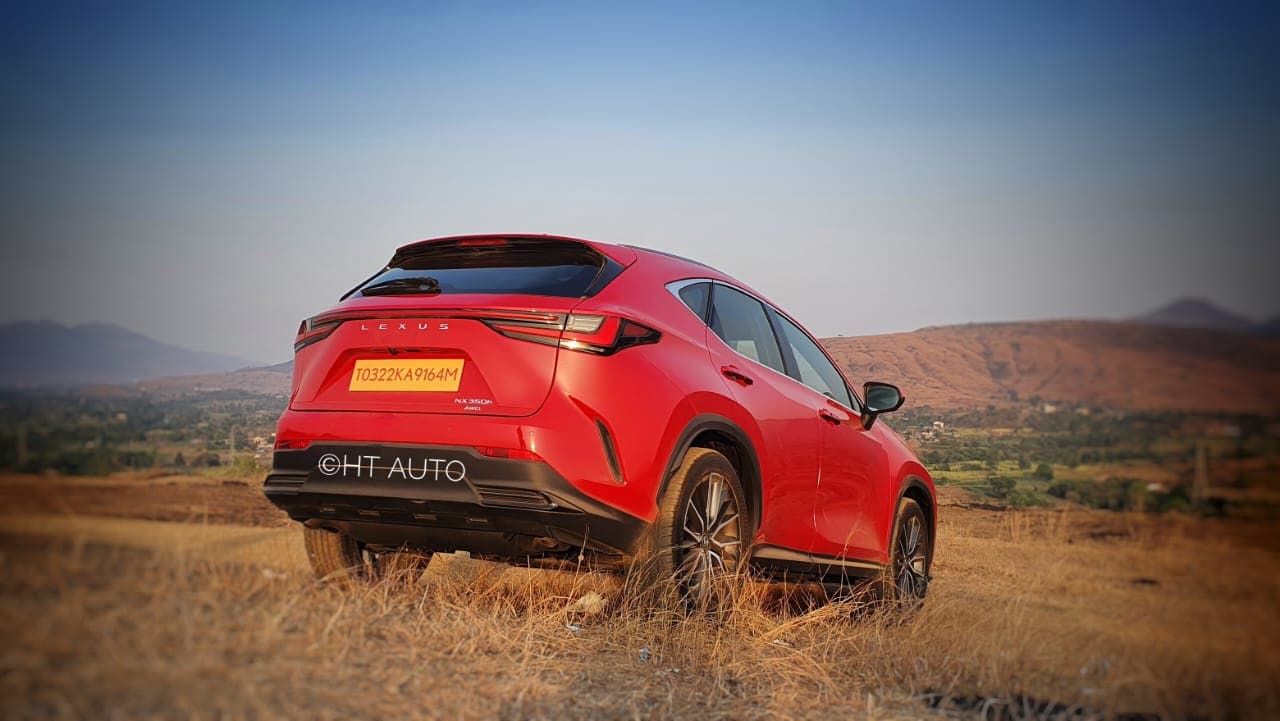 The rear light bar is positioned slightly above but connects the two tail lights to give a more upright visual impression to the Lexus NX 350h.

In terms of dimensions, the Lexus NX 350h has a wider front and rear track, while the overall length and wheelbase also go up compared to the preceding model for a more dominant road presence.

The power move Lexus has always had is how exquisite the cabin of its cars are. The NX 350h is no exception and in fact, goes several steps ahead of the preceding model as well. 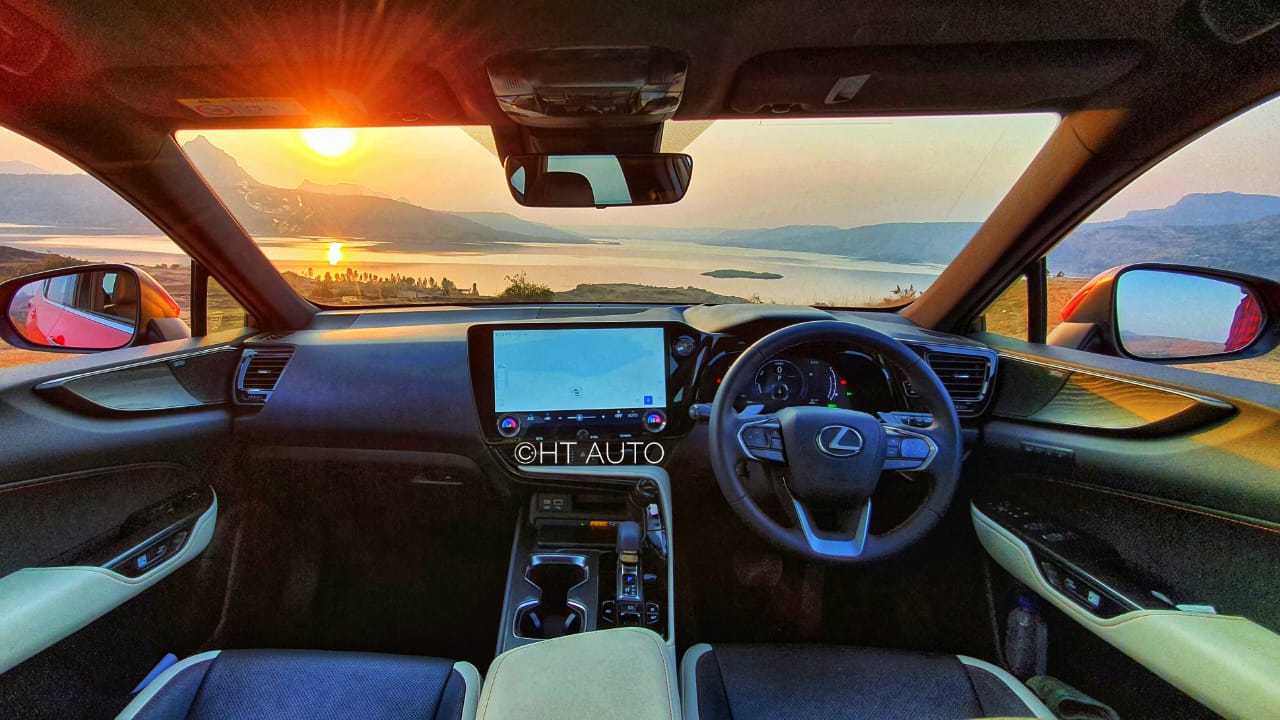 The cabin, especially the driver section inside the Lexus NX 350h has a clean yet sophisticated visual appeal.

A beautiful confluence of trendy technology and a typically well laid out space goes a big way in helping the NX 350h stamp its luxury credentials. For starters, it boasts of an absolutely mammoth 14-inch main infotainment screen - largest in the segment. But what good is a large screen if it isn't quite responsive and with a sharp display. No worries here because the screen is fluid to touch with an almost tablet-like experience - both in terms of control as well as view. Lexus claims it has five-times the processing power of the unit in the previous model and gets optically bonded glare reduced technology. There is support for wired Android Auto and Apple CarPlay, and as many as five devices can now be connected to the unit. The controls that a driver is more likely to make use of - navigation, safety features, among others, are cleverly placed to the right of the screen for better access and easier reach. The same attention to detail extends to the Head-Up Display (HUD) unit on the windshield as well. The steering-mounted touch pads allow for customized positioning of the HUD as well as customized display features just above the fully-digital driver display.

The entire dashboard is done tastefully in soft-touch leather with the side bolstering on the front seats being enhanced for additional comfort. A customer may also choose between multiple cabin colour combinations like Black and Cream, Hazel, Black and Dark Rose in the Exquisite and Luxury variants, and Flare Red, Black and White in teh top F Sport variant.

The SUV also gets a 64-colour ambient light system with 14 pre-selected colour themes. The lighting is subtle and illuminates the footwells, door panels and the center console. 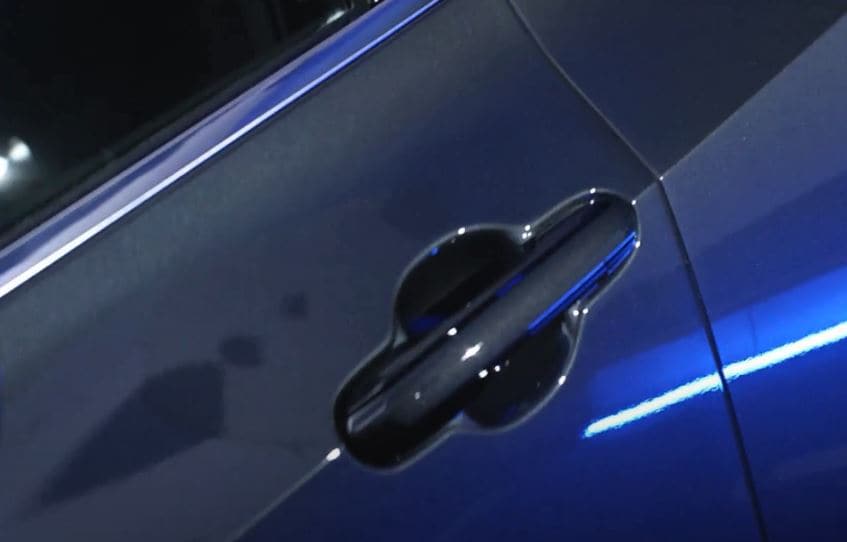 Lexus introduces e-latch on all door handles on the NX 350h. This system electronically controls the latching and unlatching of doors. Additionally, the latch on the inside of the doors have an anti-static coating as well.

Then there's Voice-Recognition feature which allows occupants to issue commands even during music playback while the other feature highlights include a panoramic sunroof (fixed rear half), wireless phone charging, ventilated front seats, Hands-Free power back door, Mark Levinson 17-speaker surround sound system with sub-woofer, among others.

As far as space is concerned, the Lexus NX 350h is quite comfortable for passengers being driven around with decent leg room, knee room and head space. But three seated abreast may be a tight squeeze and the size of the rear windows continue to be a tad too small. A window shade here could have been a simple yet necessary addition as well but remains missing.

The NX 350h is powered by a 2.5-litre four-cylinder motor with AWD but the biggest ace up its sleeve is that it also comes with a 259-volt lithium ion battery making it the only hybrid SUV in its segment. This helps the SUV race to the 100 kmph mark in 7.7 seconds which is 16 per cent quicker than the preceding model. The electric motor is also attached to the rack at the bottom instead of the steering column which helps the vehicle have a quieter but more engaging drive trait. 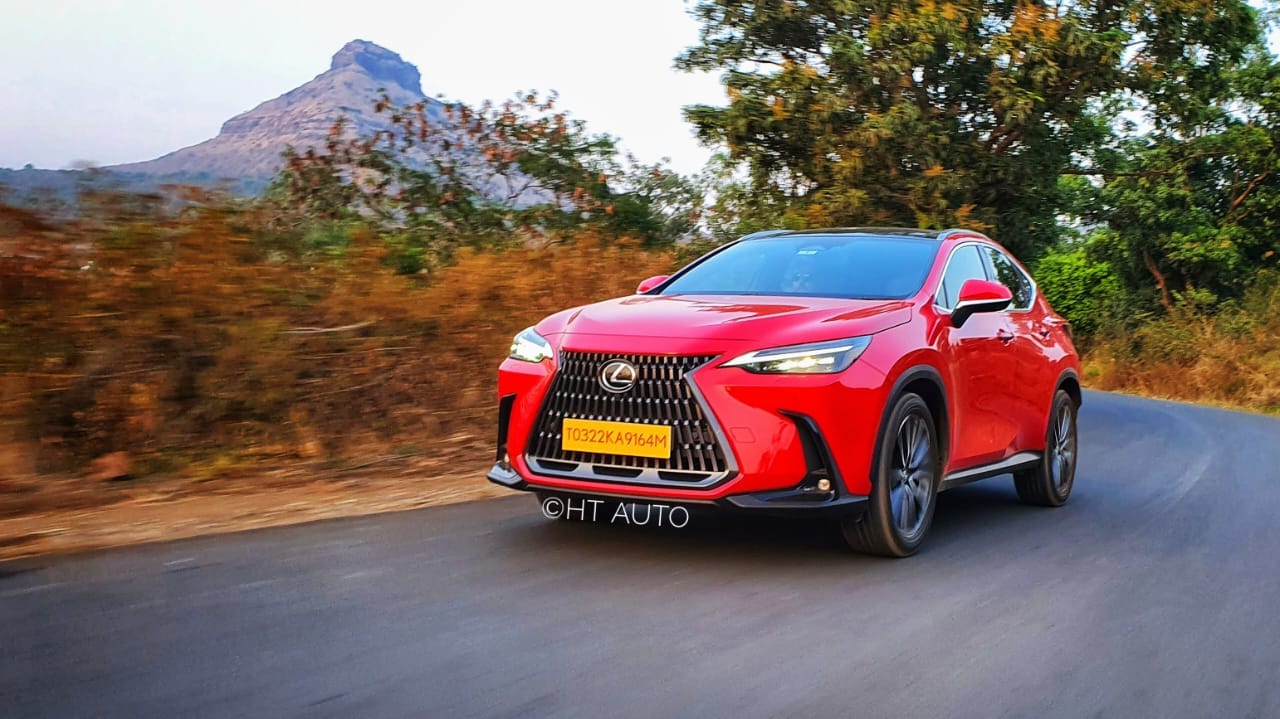 The side reinforcing rubber on the wheels of the NX350h helps enhance its run-flat performance, claims Lexus.

But out in the real world conditions, the NX 350h continues to be at its best when doing more sedate rounds than when being pushed to perform. Yes there is a Sports mode handy but the vehicle is more suited for a balanced drive and ride experience. The acceleration is as smooth as it is refined with minimal rubber band effect, and the power build up evokes a sense of comfort. But there is a noticeable degree of resistance when the throttle is pushed with purpose with the otherwise perfect 6-step e-CVT gearbox taking a bit to slot the right number for you. A bit more power is could have also helped the SUV's case, especially on uphill climbs.

That said, there is a high level of refinement on offer with a quiet engine - unless of course being pushed, and a firm control on ambient sounds from the outside. If you would mostly be on the back seat of this Lexus, the ride promises to be as comfortable as ever, also thanks to performance dampers and Adaptive Variable Suspension on the top-end F Sport. A lower center of gravity also helps the vehicle reduce body roll, especially when cornering. On straight lines, the SUV manages to retain its steady nature even as the power builds up. 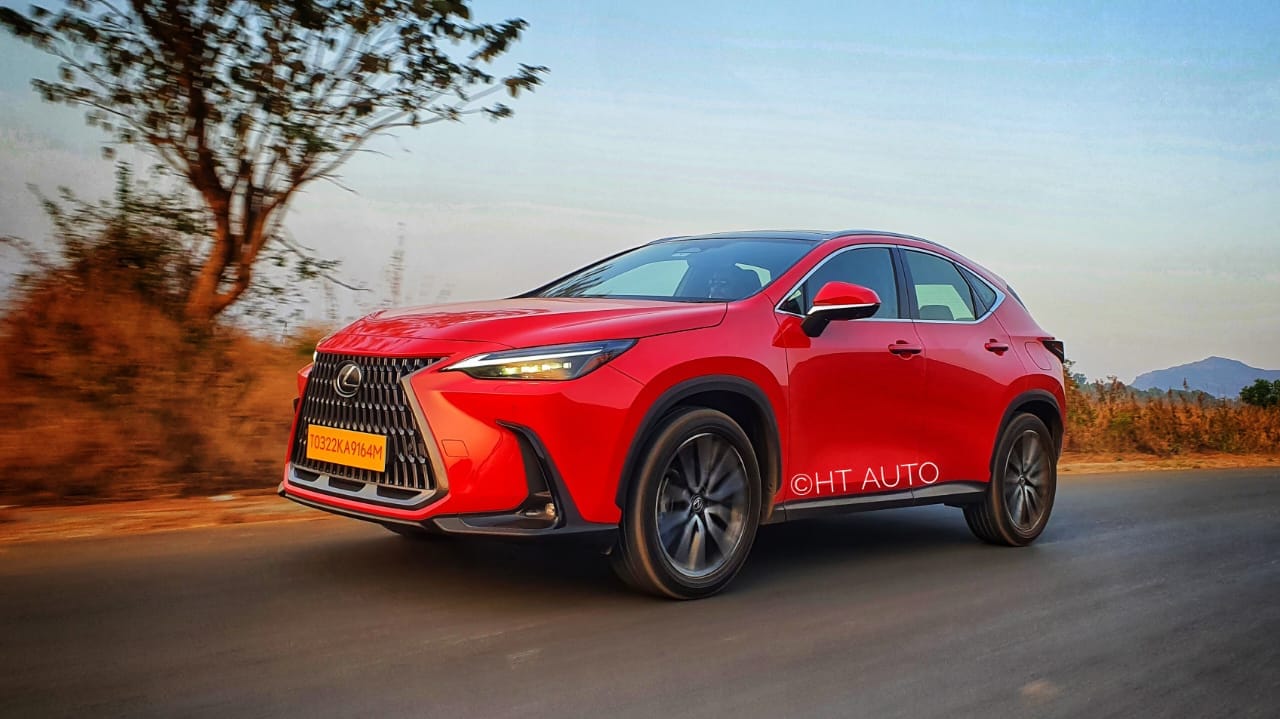 Lexus has also not cut a single corner when it comes to safety. Apart from the claim of ultra-high-strength components, the latest NX 350h comes with numerous radar units and cameras which allow it to offer features like Pre-Collision System with vehicle detection (alarm only in the India model), all-speed Dynamic Radar Cruise Control, Lane Departure Assist with Steering Assist, Lane Tracing Assist, Rear Cross Traffic Alert, Rear Camera Detection, Automatic High Beam and Adaptive High Beam system, and eight airbags, among others.

The latest Lexus in town is a confident SUV that benefits from a keen attention to detail, both on the outside and in the cabin. The Lexus badge may mean that it is still likely to be a choice of a select group of buyers but with the plethora of features on offer, there ought to be wider appeal than before. Plus those striking looks should also help enormously.

Where the NX350h does lose out though is that it isn't exactly thrilling to drive and more power could have helped its case. Considering that it comes in via the CBU route, its pricing is on point and the NX350h is a bold statement of intent that to count out Lexus in the battle within the luxury segment would be a folly one rather not make.