Skoda Kodiaq is the flagship SUV from the Czech manufacturer and does quite well in several markets where offered.

Skoda Auto India is on quite a high with the continuing success of Kushaq. Launched last year, the mid-size SUV has been faring well and was responsible for taking Skoda to newer highs here in terms of sales volumes. Buoyed by the success, Skoda is upbeat about its 2022 prospects and was first off the block with the launch of the 2022 Kodiaq SUV earlier this month. That the first batch of the Kodiaq is sold out ought to auger well even if the flagship SUV isn't exactly meant to be a volume driver.

The Kodiaq had to be taken off Indian shelves previously due to the shift to BS 6 emission norms. But the three-row SUV is now back with a new petrol motor at its core and the same promise of offering value luxury.

Brought in via the Completely Knocked Down (CKD) route, the Kodiaq may carry a rather costly price sticker, starting at ₹35 lakh and going up to over ₹37 lakh for the Laurin & Klement variant that we received for our review session. But Skoda appears to once again be gunning for players in the luxury space and in that sense, does the new Kodiaq have what it takes to impress?

The Kodiaq 4x4 is now being powered by a 2.0-litre TSI petrol motor which comes mated to the familiar seven-speed DSG gearbox. This is the same engine that also powers the latest Superb and Octavia.

From the word go, there is much to once again like in this unit and because this is the main highlight of the car, we start off this review with the drive dynamics of the Kodiaq before the other details. 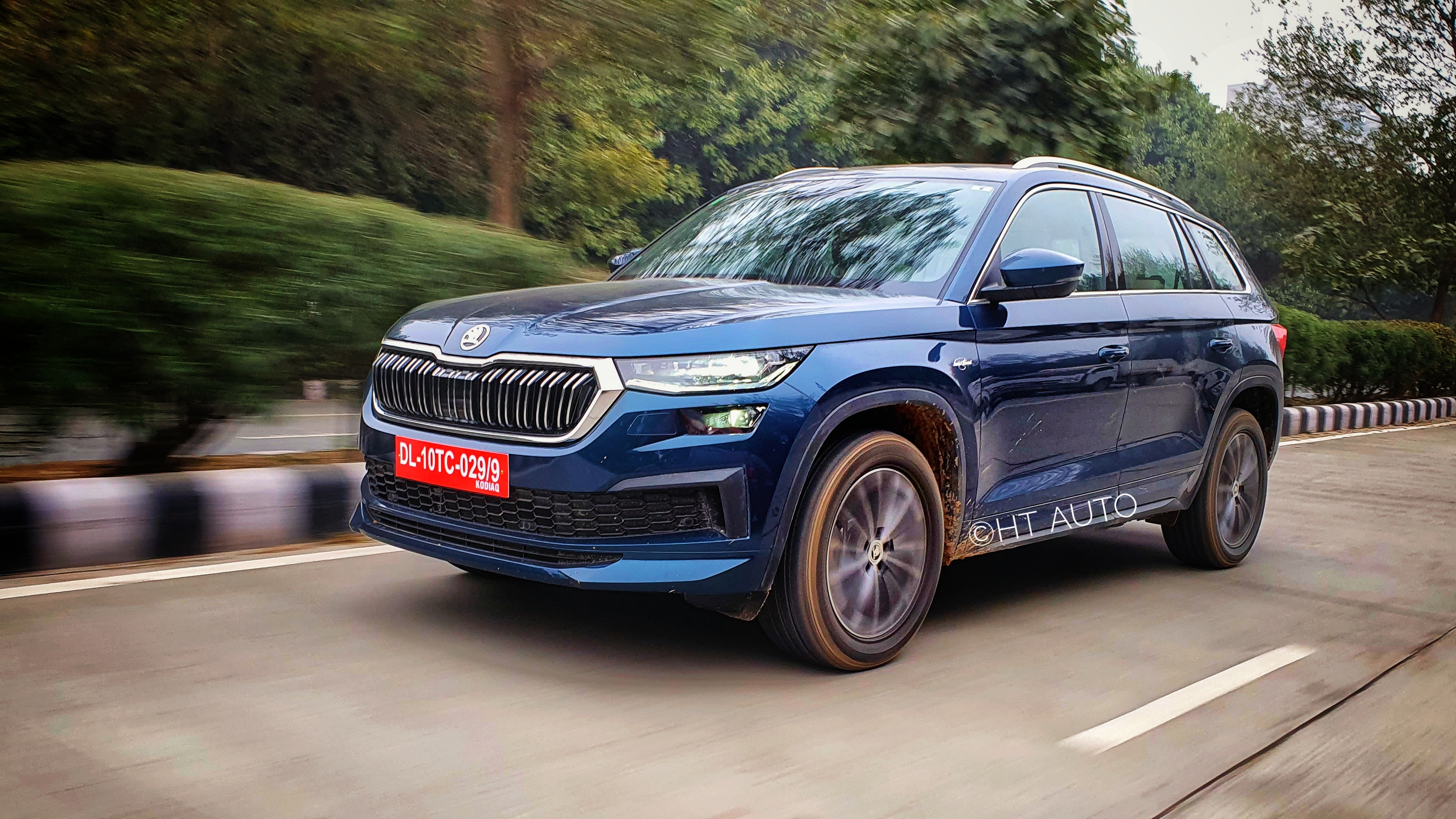 Kodiaq offers a composed drive experience for most parts but is also eager to throttle responses on open and clear roads.

The Skoda SUV is mighty fun to drive and now has a sporty flavour to it - not something I would have initially guessed even when the TSI petrol unit was confirmed. Nimble on its wheels, the vehicle is a breeze to drive within city limits and the light steering makes negotiating heavy traffic conditions nearly effortless. Despite the large dimensions of the vehicle, not once did I have to deeply ponder my moves in start-stop traffic. And once the roads cleared, there was enough pulling power to stitch a gap with the receding city skyscape in the rear-view mirror - 100 kmph from standstill comes in just 7.8 seconds. Credit where due and the DSG gearbox ticks the numbers extremely well and the triple-digit mark comes up in absolutely no time at all.

There are multiple drive modes to choose from and while Normal and Comfort should suffice for most parts, there is Sport mode as well which is an icing on the proverbial speed cake. With a high ride position, the Kodiaq is an SUV that tackles highways with much gusto and the suspension set up is superbly balanced to offer a really well cushioned ride experience to all inside. The Kodiaq has an all-wheel drive system and it remained largely able on the sandy tracks we drove it on. The suspension set up, once again, adds to the highlights of the vehicle.

But while Kodiaq excels on many fronts, watch out for some degree of body roll if and when attacking corners aggressively. This is most felt in the second row. The other aspect are the brakes which could have done with a bit more bite as I found myself pressing the pedal a bit more strongly, a bit more times than I would have liked. And then there is that lightweight steering that, while a blessing in city traffic, lacks feedback at high speeds.

Overall, the Kodiaq cannot be faulted much for its drive and ride quality, and fares remarkably well in both city and highway traffic conditions. A strong clamp on NVH levels, a refined petrol motor, impressive-as-always DSG gearbox and a brilliant suspension are the stellar highlights of the flagship Skoda SUV.

You are paying big bucks for the Kodiaq and so, you would expect an SUV that offers a high level of refinement, luxury and a comprehensive feature list. Good news - the Kodiaq mostly doesn't disappoint. 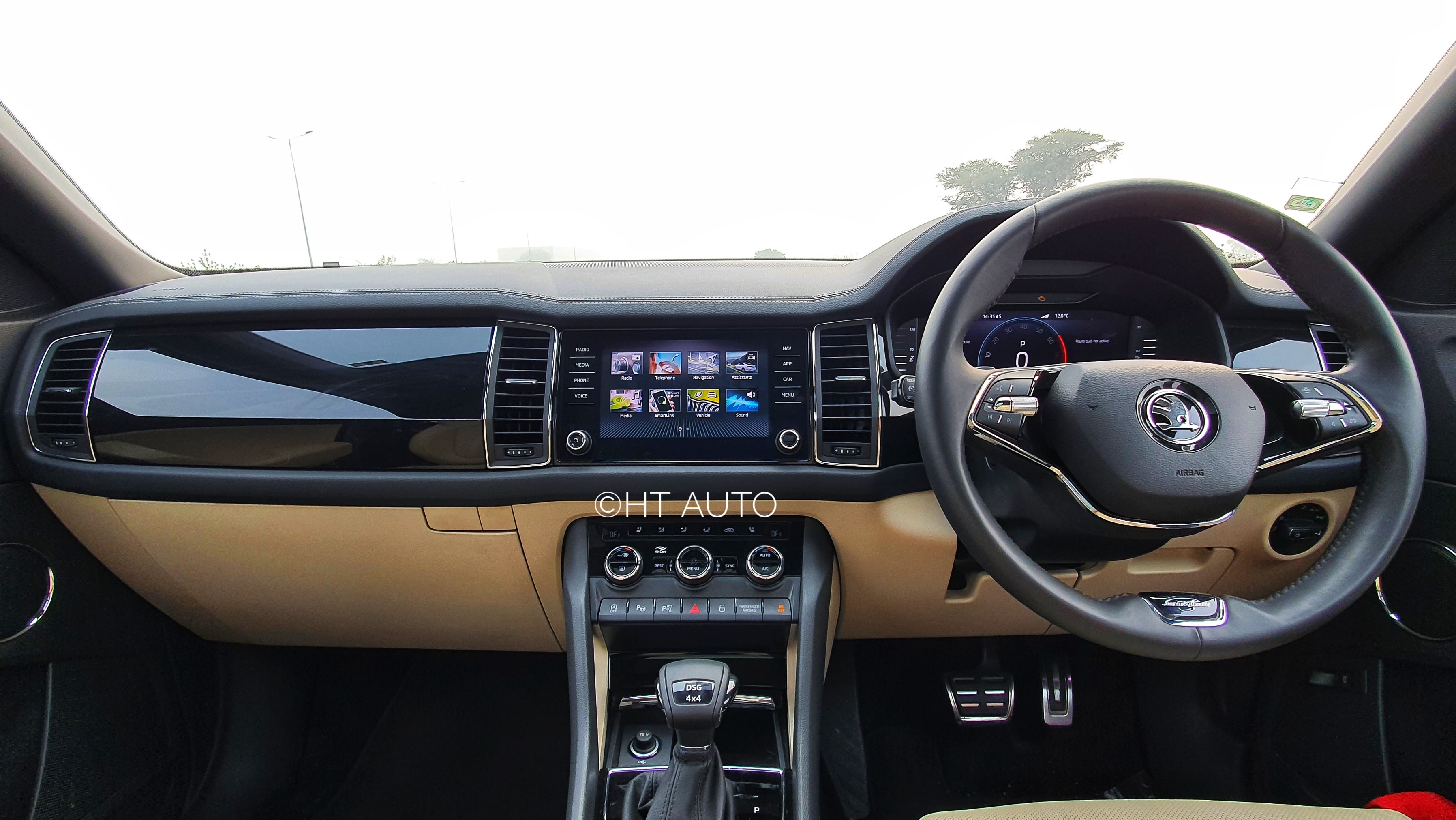 A look a the dashboard layout of the 2022 Skoda Kodiaq.

Yes, the third row is a mere formality yet again and has very limited space on offer. Getting in and out may be easy courtesy the tumble and tug feature on the second row seats but staying in that last row is a the ultimate nightmare of someone claustrophobic. There are no dedicated AC vents and just one 12V charging point. 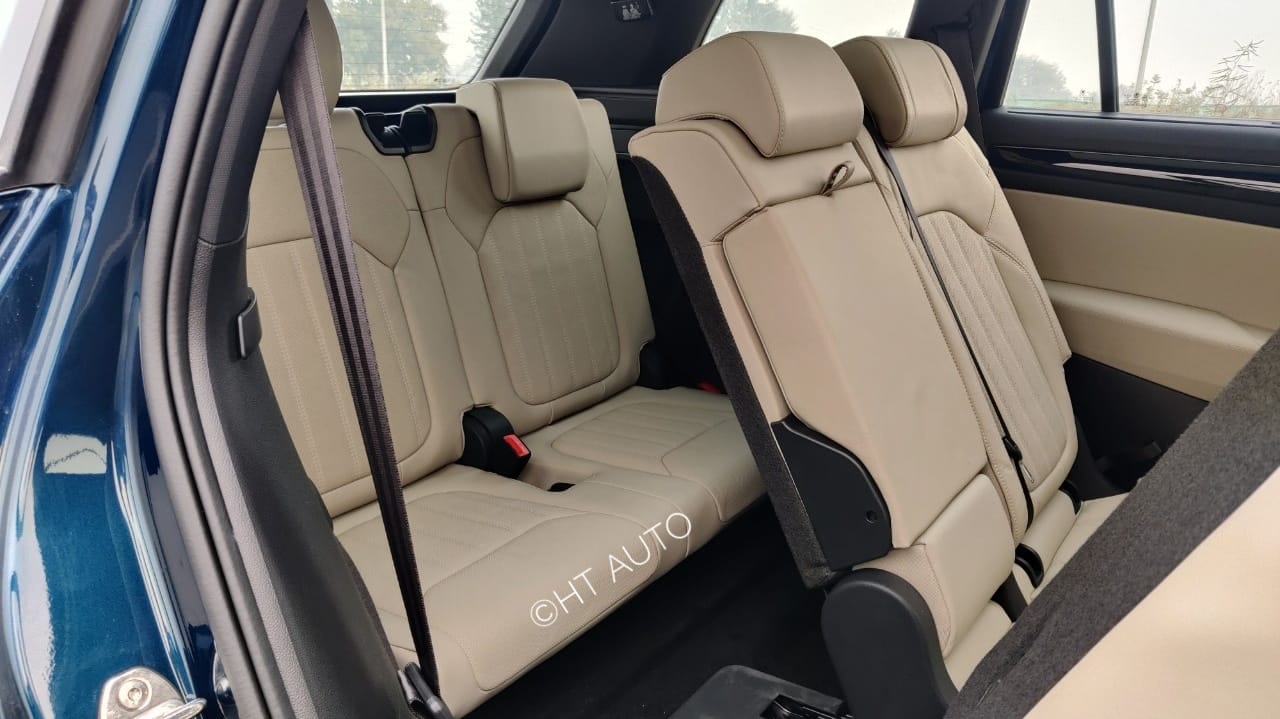 The third row seats inside the Kodiaq is best for very young kids because there is limited space.

But move a row ahead and the Kodiaq is a whole other car. There is once again generous amount of space for the passengers in the middle with kneeroom, legroom and headroom being enough for long journeys. And while under-thigh support could have been slightly better, three passengers - despite the floor hump in the middle - should be quite comfortable.

What also helps matters are large windows on either side, complete with manual shades, and a large sunroof at the top. If the heat gets a bit too much, close the shade and turn to the second-row AC vents for a pleasant ambiance.

The Laurin & Klement variant is offered with stone beige leather perforated upholstery and the fit and feel is as premium as it can get. Double stitching on the seats, chrome inserts on the door, ambient lighting, powerful Canton 625 W 12-speaker audio system with subwoofer, all add to character of the Kodiaq's cabin.

As for the front row, there are 12-way adjustable electric seats with in-built cooling and heating in the top variant, a two or three-spoke steering wheel with mounted controls, two storage compartments on the dashboard and an eight-inch main infotainment screen that is vivid and responsive to touch, even if a magnet for catching fingerprint. 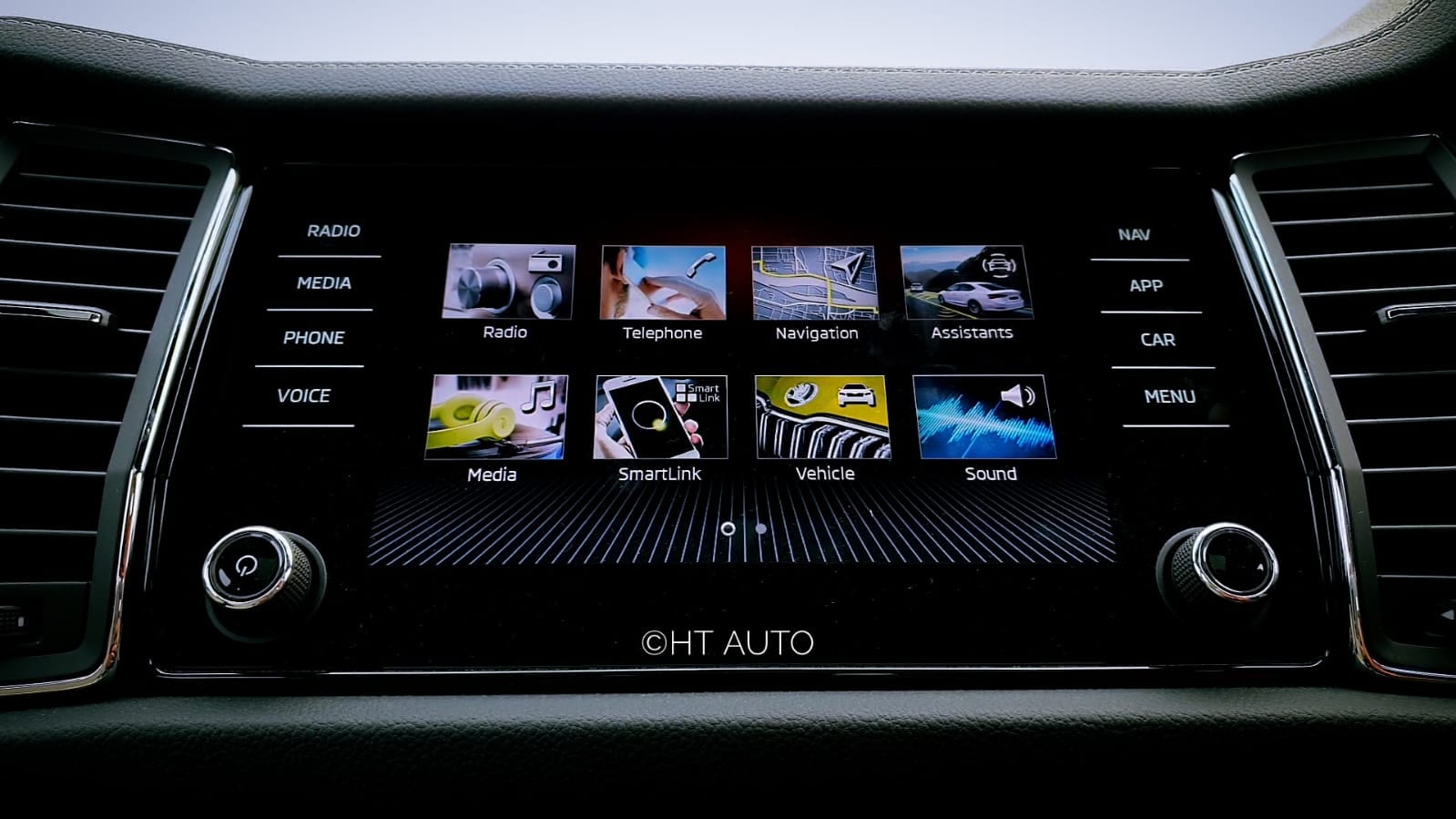 The main infotainment screen inside the 2022 Skoda Kodiaq.

For the driver, there is a 10-inch display with multiple themes to choose from. Regardless of the time of drive, the all-digital display remains crystal clear and the fully programmable Virtual Cockpit becomes a great buddy for and on long journeys. 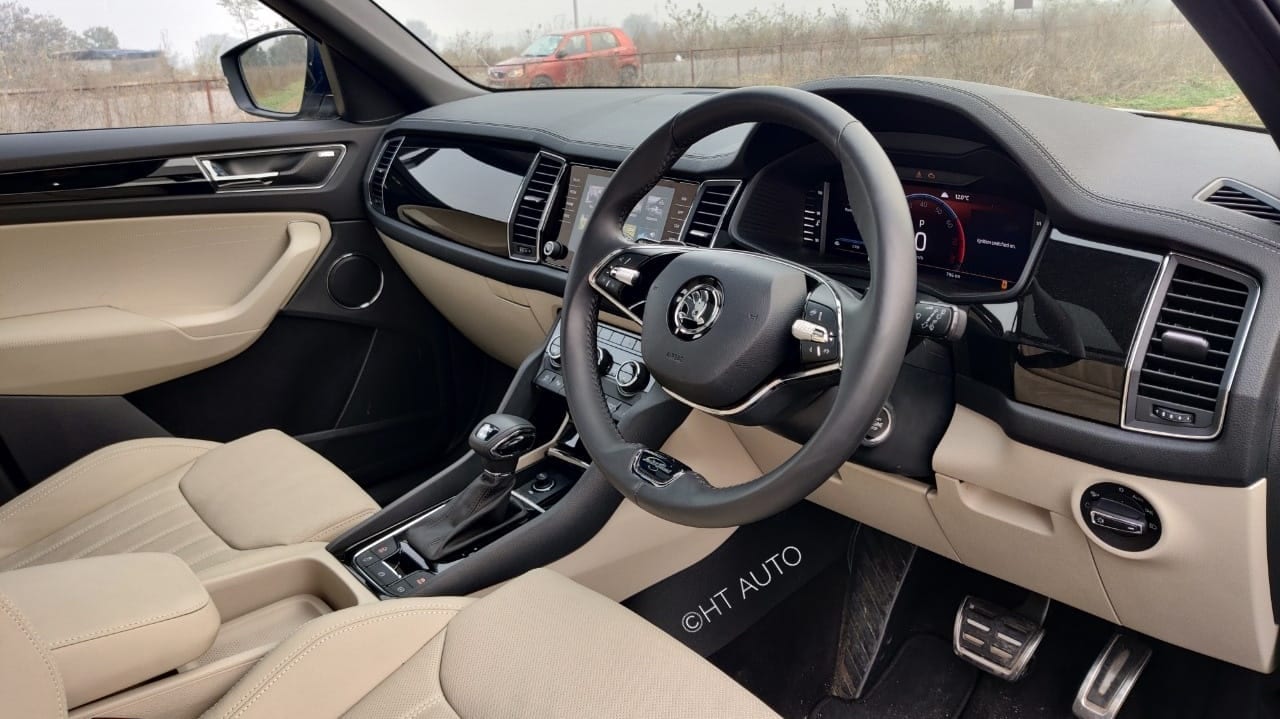 The cabin of the Kodiaq is an amalgamation of top-notch quality on the seats as well as dashboard, coupled with plenty of storage space.

The central console under the AC control knob is simple but well appointed, complete with the gear lever, storage space for wirelessly charging compatible phones and USB type C and 12V charging points. I however would have ideally wanted the drive mode selection buttons to be placed elsewhere for easier access. Also, the driver armrest is shockingly low and is utterly useless unless Skoda expects someone to drive bent at an obnoxious angle to rest the left arm. 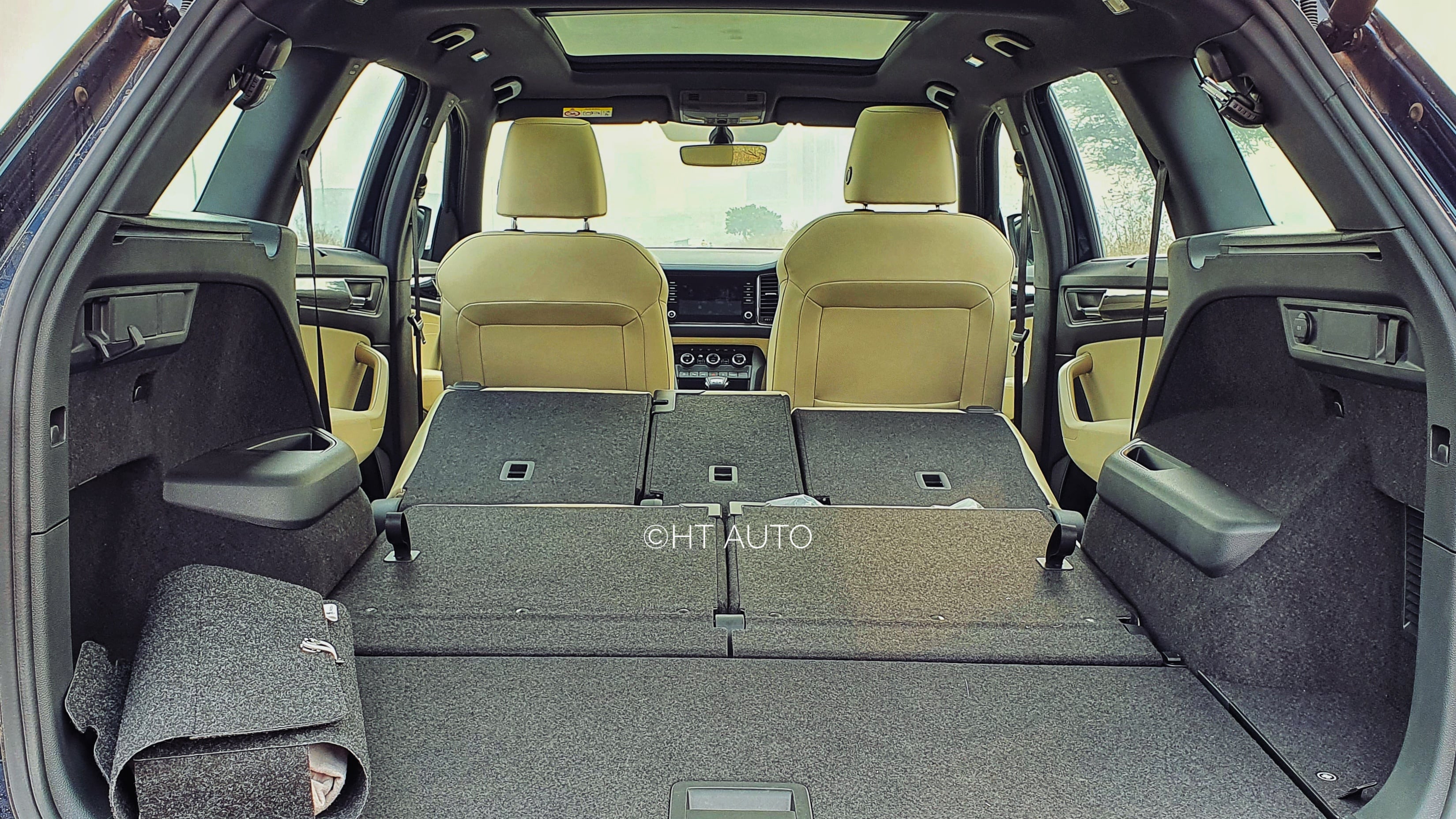 The Kodiaq has a massive flat bed for luggage if the seats in the second and third row are brought down. Even with the second row seats up, there's enough space to leave nothing behind on a long trip.

There are absolutely no obnoxious angles to the exterior design of the Kodiaq as it continues to be one of the more sophisticated SUVs in its segment, visually speaking. At a time when many opt to make their vehicles look masculine and macho in order to grab attention, Skoda - in fact most of the Volkswagen group - continues to lend their vehicles with a characteristically European design flavour. On the Kodiaq, it works and works well. 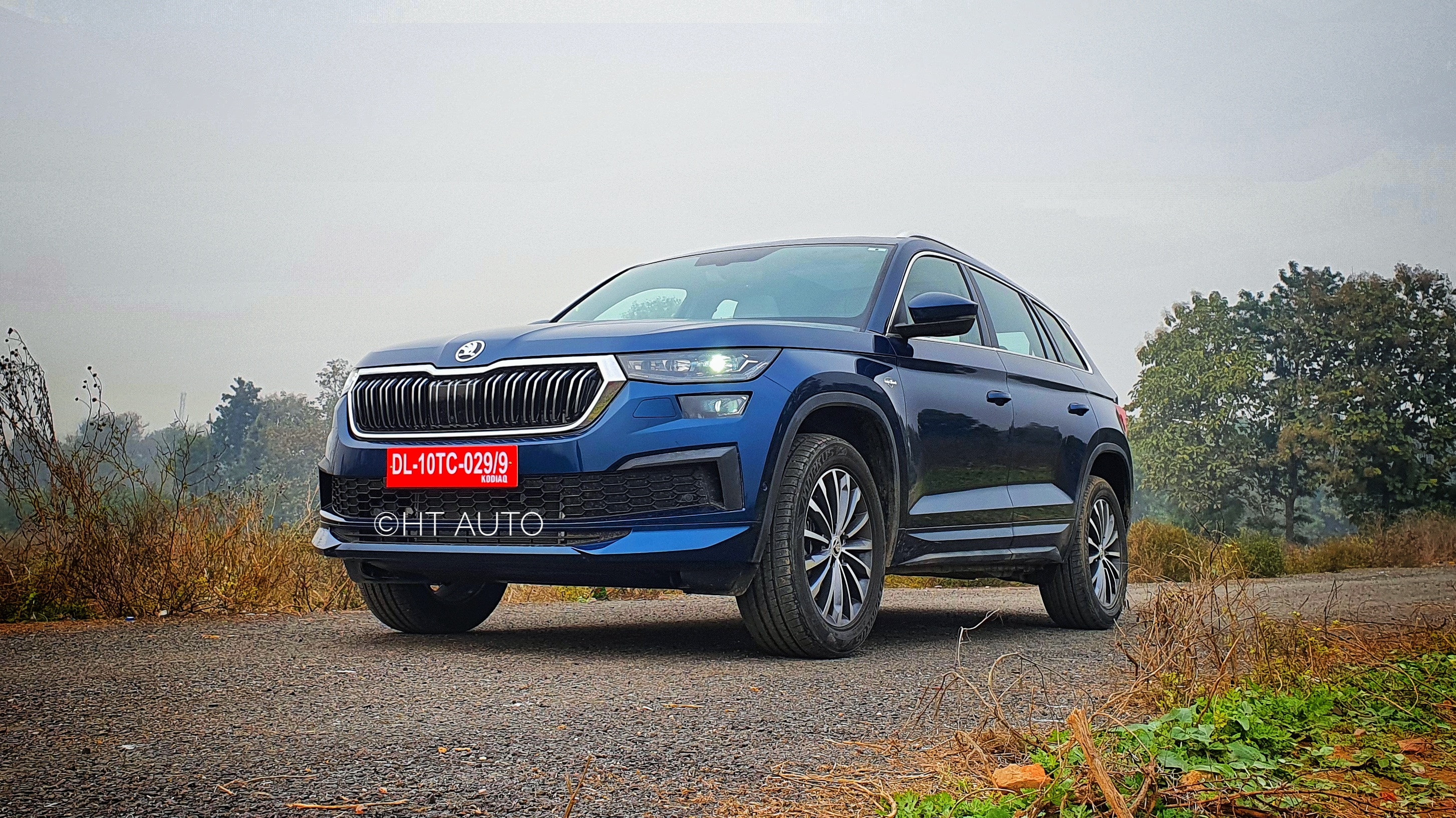 The Kodiaq has a confident stance and while it is undeniably Skoda, it also has premium visual cues all around.

The SUV now gets an updated grille with chrome border, and has a slightly higher bonnet than before. The head lights are new and feature an updated LED DRL signature while the front bumper has been revised slightly.

Over at the side, the Kodiaq stands on 18-inch multi-spoke alloy wheels which have been re-designed while the entire side glass window area is once again outlayed with chrome. There are some prominent body character lines on the side but not strong enough to crave attention for itself. 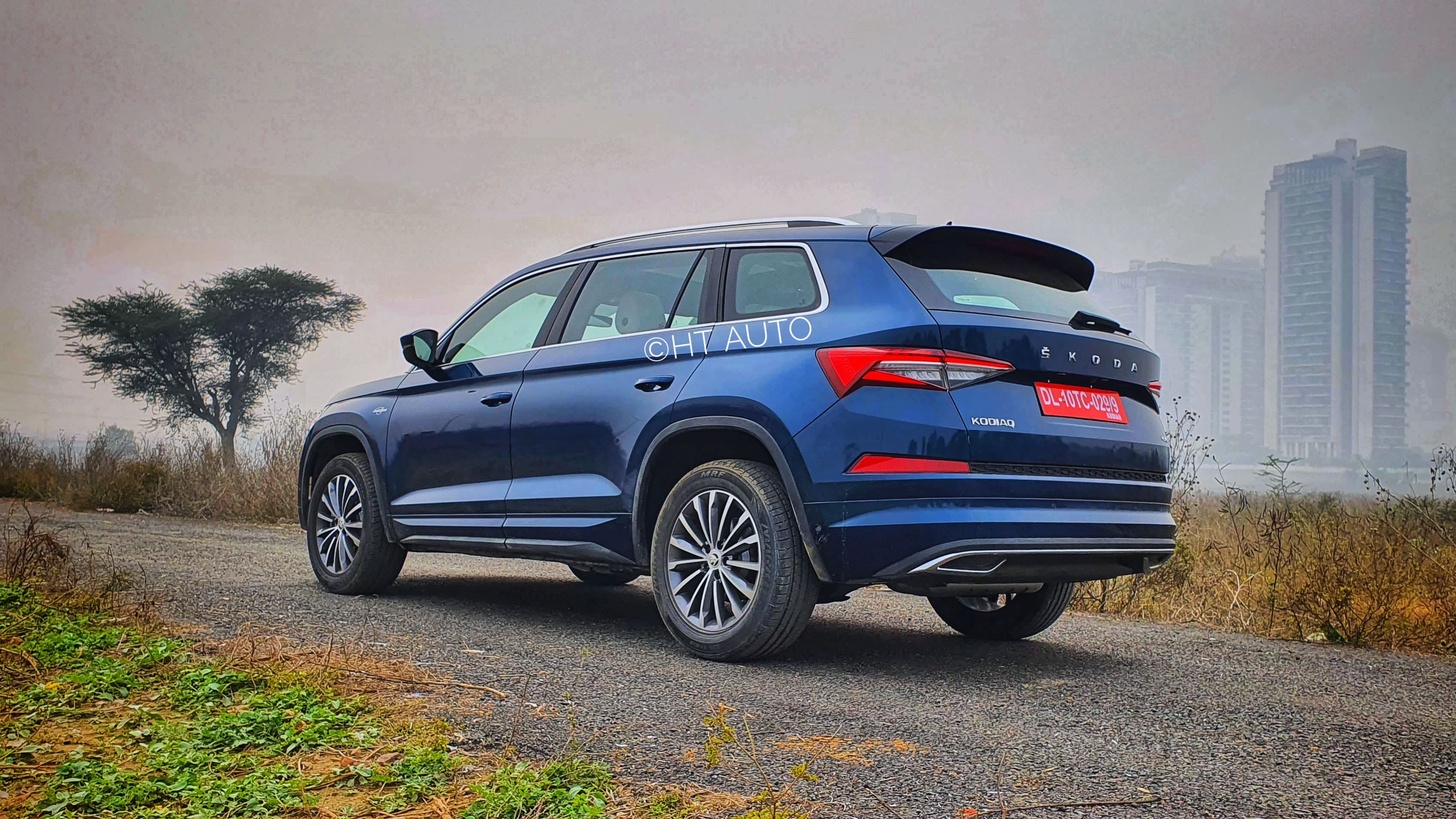 At the rear, the profile remains rather similar to what we have seen before with LED tail lights, 'Skoda' lettering and a minor update to the bumper.

Kodiaq is being brought in via the Completely Built Unit (CBU) route and this is why it has a rather premium price tag.

At the rear, the profile remains rather similar to what we have seen before with LED tail lights, 'Skoda' lettering and a minor update to the bumper.

Kodiaq is being brought in via the Completely Built Unit (CBU) route and this is why it has a rather premium price tag.

I so wish that this Skoda was locally produced to keep a check on the pricing because other than this one factor, there is not much to fault the SUV on.

The Skoda Kodiaq is now younger than ever before thanks to the transplant of the petrol motor within. It boasts of a solid comfort and safety feature list and is plenty of fun to drive. That there is the 4x4 option is another bonus in a package that looks smart. The first batch of 2022 Kodiaq in the Indian market is sold out and having driven it, I am not one bit surprised. Up against the likes of Toyota Fortuner, MG Gloster and even the Volkswagen Tiguan, the Kodiaq is a spirited player and because Skoda is ramping up its sales and service outlets, it should fare better than it ever did in the past.