Elon Musk has said since the introduction of Tesla Cybertruck, many things have changed and hence specs and the price will vary compared to the previous announcement.
By : HT Auto Desk
| Updated on: 06 Aug 2022, 16:56 PM 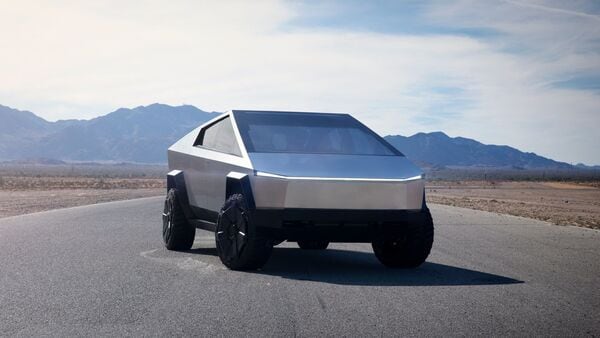 Tesla CEO Elon Musk stated the specs and price of the Tesla Cybertruck will change compared to what was announced when the electric pickup truck was announced back in 2019. Musk stated this in Tesla's Cyber Roundup, the annual meeting of shareholders. Earlier reports on Tesla Cybertyruck have shown that the EV company has carried out a few changes to the exterior of the EV.

Musk in the meet said Cybertruck pricing when it was unveiled in 2019, the reservation was done at $99. A lot has changed since then, so the specs and the pricing will be different. “I hate to give sort of a little bit of bad news, but I think there's no way to sort of have anticipated quite the inflation that we've seen and the various issues," added the Tesla chief.

The Tesla Cybertruck was recently spotted in a track test which is being guessed to be Tesla's Fremont factory test track. The updates that have been carried out include production-spec side view mirrors and a singular windshield wiper on the side of the windshield. While the tract testing, the electric pickup truck appeared without its aero wheel covers. It is expected that this change can be found in the production model. The Cybertruck also sported more rounded edges to meet the safety of pedestrians. Tesla has not revealed any technical or mechanical specs of the electric pickup truck.

Tesla Cybertruck has been facing multiple delays since its introduction, however, Tesla shared that the much-awaited electric pickup truck will enter mass production by the end of next year.

(Also read | Tesla in trouble, may have falsely advertised Autopilot )