Why infotainment screens in cars are becoming larger launch-by-launch

The massive advantage of capable infotainment units in a car is well established.Infotainment screens are not just increasing in numbers inside any single car but are also expanding in dimensions.
By : HT Auto Desk
| Updated on: 16 Jul 2020, 10:37 AM Byton's M-Byte e-SUV offers a 48-inch screen and this has been one of the biggest highlights of the vehicle. (Photo: Twitter/@BYTONcars)

The technology inside the cabin of a new car has become almost as important as the looks, drive capabilities and safety features in current times. While EV makers like Tesla are driving the gadgetry gameplay in modern-day automobiles, traditional giants in the industry have also joined the race to offer a better loaded vehicle to address a wide-variety of the modern-day driver and passenger(s). As such, the infotainment screens have become the main focal points for almost every automaker and these screens are not just packed to the brim with gizmos and tech capabilities but are also fast increasing in dimensions.

Much like the path charted by smartphones, there is a school of thought which subscribes to the belief that the larger the infotainment screen, the more capable it is. This may not always be true - a five-inch display may pack in more than a mammoth 12-inch screen. Having a large display, however, does add to the premium quotient of a car and numerous studies have shown prospective buyers lean towards vehicles with an imposing central display unit.

Little wonder then that the upcoming - and highly anticipated - 2021 S-Class from Mercedes will pack in more screens than ever with the central unit being a gorgeous 12.8-inch OLED screen with haptic feedback. The upcoming car replaces a large number of physical buttons present in the present version with controls that are staright up in the plethora of screens all around the cabin. The German auto giant promises tablet-like screens which have superior processing power, special pixels for unmatched clarity and compatibility with swipe, gestures and voice command. The system will also get bio-metric security. 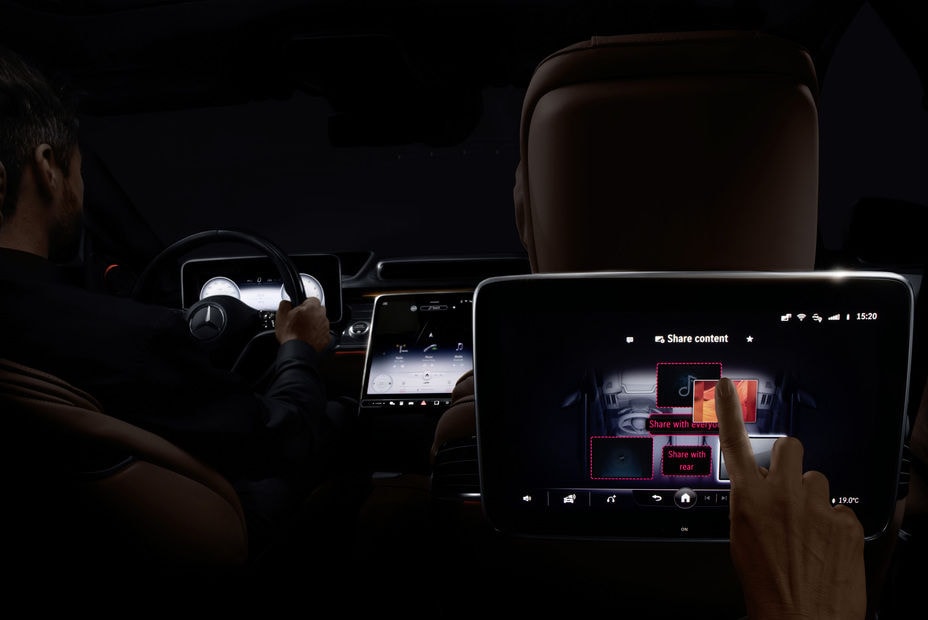 The new Mercedes S-Class will offer half a dozen display units in the cabin. (Photo courtesy: mbusa)

Yes, we are still talking about a car here.

The S-Class may be an absolutely stunning luxury vehicle but even mass-market passenger vehicles are looking at equipping infotainment screens with as much as is possible while using the size of the screen as a marketing proposition. From five inches to eight inches and even beyond, cars in almost every segment now offers a screen that claims to be the main control unit.

If the engine is the heart, infotainment screens seek to be the mind.

But is there really an end to the race towards offering the largest and best-equipped infotainment screen? Do we really want a mini television inside our cars? Won't increasing screen sizes eventually make these a distraction while driving? Chinese electric vehicle startup Byton's M-Byte e-SUV promises a 48-inch 4K digital display. Cool or crazy?

There is little doubt in the fact that new-age customers prefer a sharp, crisp and large infotainment unit which takes care of Navigation and AV needs, and a whole lot more. These screens also often make for a safer drive by providing crucial driving and car-related statistics. Most are also connected to the web which brings the online sphere a whole lot closer to people on the move. An outrageous race towards offering the biggest screen possible, however, is more likely to cause distractions and negate the benefits on offer.