Video from a dash cam shows the horror as a Toyota Camry passes through a street, hitting the Mercedes which then hit the Hyundai which, in turn, hit the Porsche.
By : HT Auto Desk
| Updated on: 16 Nov 2021, 11:29 AM 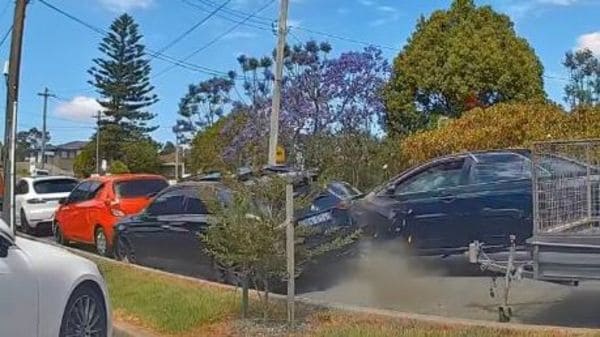 Tragedy can strike even without moving a muscle. That's exactly what owners of a Mercedes A-Class, Porsche Taycan and a Hyundai i20 would be wondering as their respective parked vehicles bore a smashed look after a Toyota driver rammed against the cars. It is reported that while the A-Class and i-20 are completely wrecked, the Taycan ‘survived with minor injuries.’

The incident was captured by a dash cam of a motorist and took place in Australia. Video from the dash cam shows the horror as a Toyota Camry  passes through a street, hitting the Mercedes which then hit the Hyundai which, in turn, hit the Porsche.

It isn't as if the Camry was overspeeding with reports suggesting that it may have been at around 50 kmph. And yet, the angle of impact may have caused significant impact to it, the Mercedes A-Class and Hyundai i20.

Local reports suggest that the person behind the wheels of the Camry did not have a license and, in fact, was out on bail at the time of the incident. On the positive side though, there have been no injuries reported.

The incident once again reveals that major accidents may not always be caused by overspeeding but may be a direct consequence of driver negligence, regardless of speeds. It also re-affirms why strict driver tests are required to minimize chances of negligent driving.