Home Auto News Watch: Tesla Owner Develops A Diy Robot Charger That Connects On Its Own

Watch: Tesla owner develops a DIY robot charger that connects on its own

The automatic Tesla charger uses a computer as its brain, a camera mounted on it and some machine learning to perform its task.However, the automatic charger is entirely dependent on internet to function and is also quite slow in its process.
By : HT Auto Desk
| Updated on: 06 Jul 2021, 14:42 PM 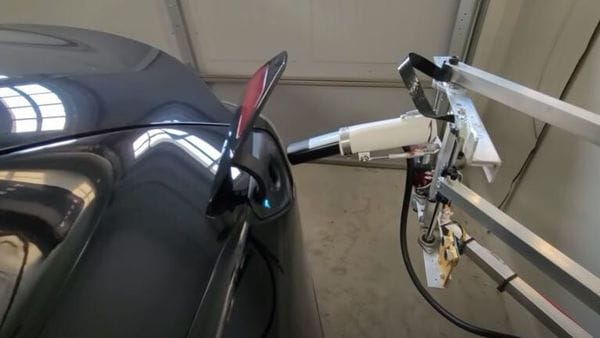 A Tesla EV owner and YouTuber Pat Larson has developed an automatic robot charger for juicing up his electric vehicle. The Do-it-yourself (DIY) type charger can position its long arm on its own to connect to the charging port of the Tesla EV. Larson has posted a video on his YouTube channel explaining the how the robot charger works.

The robot charger uses an arm-like apparatus with mounted camera, a Raspberry Pi computer and a bit of machine learning to perform its task. The computer is "the brains of everything", Larson says in the video. The robot charging system moves back and forth using linear bearings, positioning itself roughly near the charging port. A joint on its arm apparatus pivots it away from the wall and toward the parked Tesla.

Larson further explains that an automated servo motor "rotates the charging handle out when it's needed" and an ultrasonic distance sensor gives feedback to the computer to ensure that the charging arm doesn't strike the car.

The Raspberry Pi computer has been fed with machine learning framework called TensorFlow. This framework helps the robot charger understand where to move with the help of photographic evidence. In case the garage is not lit enough, there's a solution for that too. A small light illuminate the right spot to help the robot arm's positioning.

Apart from monitoring the robot arm, Larson uses Tesla API software to open the charging port of his Tesla vehicle. The TensorFlow framework is put to work with the press of a button. However, the developer says that the process "not (that) fast".

Another weak point about the DIY charger is that the software runs on internet, meaning that the system could stop working if there were an internet outage. Thus, Larson still needs to put in more work and effort into his DIY project.

Automatic chargers have long been talked about by Tesla CEO Elon Musk but there has been no news about it since 2015, Car and Driver reported. Last year though, Musk had said that "metal gear snake" automatic charger is still in Tesla's development plans.