Tesla Cybertruck will also get a roof embedded with solar cells which will be retractable. Elon Musk says that the Cybertruck will retain its size in the final production.
By : HT Auto Desk
| Updated on: 04 Jul 2021, 10:16 AM 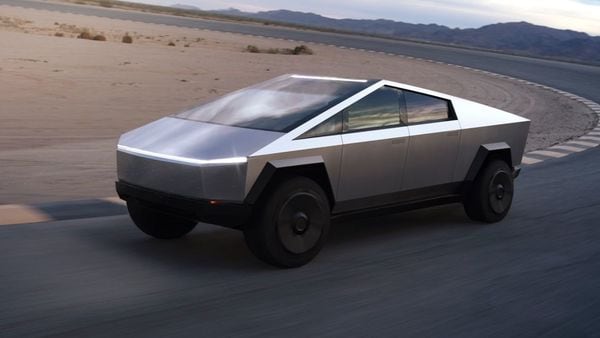 Tesla chief Elon Musk has confirmed that Tesla Cybertruck will get rear-wheel steering. He took to Twitter to share that the electric vehicle maker is doing so to make the Cybertruck capable enough to handle tight turns and have efficient manoeuvring ability.

However, it is not known if the Cybertruck will get basic rear-wheel steering or will have a special mode like the Crab mode feature found in the GMC Hummer EV. In this mode, the Hummer utilises its four-wheel steering to move sideways.

Friday afternoons are usually Tesla design studio time. Cybertruck will be almost exactly what was shown. We’re adding rear wheel steering, so it can do tight turns & maneuver with high agility.

Lot of other great things coming.

Musk also noted that the final production version of the Cybertruck will be almost exactly as it has been shown in its previous appearances with only minor changes. In the past, he had talked about Tesla's plans of updating the Cybertruck’s adaptive air suspension. They also thought about making the truck smaller, however, Musk had scrapped that plan after a design review in May last year.

The Tesla Cybertruck has been seen multiple times on the roads of California, New York and Texas. Musk also said in the tweet that "great things" will be implemented in the Cybertruck, however, he kept those details under wrap.

Earlier it has been reported that Tesla Cybertruck will get a roof embedded with solar cells. This solar roof will also be retractable. Reports say that Tesla's tri-motor variant has the highest range that moves up to more than 805 km and it can also touch the speed of 96 kmph in 2.9 seconds. The price of the three-motor version of the Cybertruck is expected to start from $50,000 and its dual-motor version will start at $40,000.