A viral video shows a Tesla electric sedan smoothly driving through deep flood waters and making its way to its apparent destination.
By : HT Auto Desk
| Updated on: 09 Aug 2020, 01:00 PM 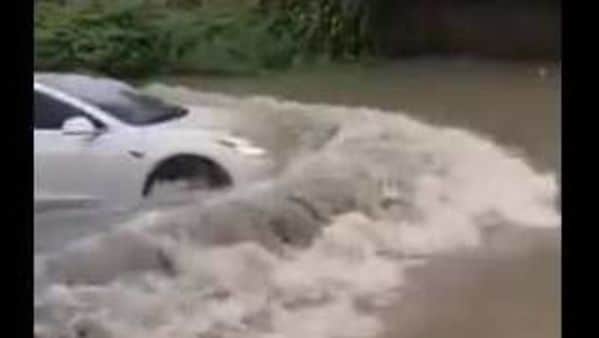 Photo courtesy: Screengrab of video posted by @Tesla__Mania on Twitter

A video of a Tesla model 3 being driven through a pool of flood water in China's Shanghai has gone viral on social media. It was posted by a Tesla fan page on micro-blogging site Twitter where the electric sedan can be seen diving into deep water on the road and smoothly steering through it.

People cheering in the background:
“A Tesla, ha!” pic.twitter.com/YsuJtefxWx

But the car smoothly comes out of the depth of the water and drives forward, making its way to its apparent destination. With its bizarre confidence, the Tesla risks driving in such conditions but goes on without a worry in the world.

It is usually expected of an off-roader with big tyres and lots of ground clearance to make such a show. Though the Tesla seemed fine from the outside, it is not clear if its engine suffered any damages. It is also possible that some water entered the car's cabin when it took a dip in the water.

(Also read: Watch: Road in London turns into river as vehicles get stuck in gushing water)

Back in 2016, Elon Musk had famously tweeted that the “Model S floats well enough to turn it into a boat for short periods of time. Thrust via wheel rotation". But he also warned that trying this is not recommended. In the following years there have been quite a few viral videos of Tesla cars being driven through flood waters, Carscoops reported.