Watch: Road in London turns into river as vehicles get stuck in gushing water 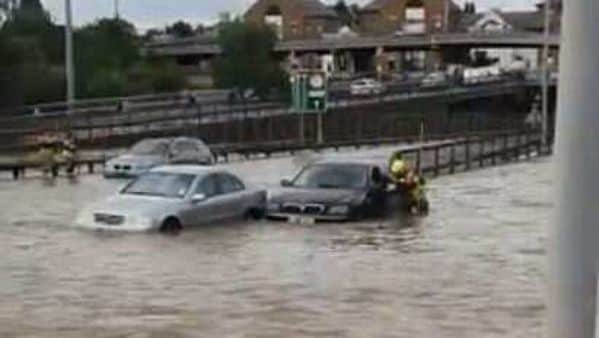 Rescue personnel had to remove passengers in stranded cars after a water outlet fault flooded a London road.

Drivers on a London road recently could hardly believe their eyes as the path ahead of them completely submerged under gushing water, leaving them stranded and with as many as eight persons in need of being rescued.

London's North Circular Road resembled a river on Monday after a water outlet burst. The resultant flooding of the road was so severe that motorists had to be rescued by personnel from the fire department. Many people took to Twitter to post videos and images of the location, warning others to steer clear of the area.

The vehicles that were already on the road, however, got stuck with no way of moving forward. Some reports suggest that the vehicles floating in the water suffered mechanical failures which meant reversing the car was not an option either.

To all my constituents travelling home this evening intending to use the North Circular. Please be aware of the flooding at the Brent Cross intersection:
pic.twitter.com/2YsIKmcD7C

Although no one was injured in the incident, the flooding of the road did create quite a traffic snarl with vehicles queuing up for at least a kilometer. The process of getting traffic conditions to return to normal reportedly took quite some time as authorities also rushed in to fix the damaged water outlet and drain the water off the road. "We're sorry to anyone who has been disrupted by a burst pipe on the North Circular Road," a spokesperson for Thames Water was quoted as saying by UK's Mirror. The report also quoted a London Fire Brigade official that eight people were removed from their respective vehicles and that the area is being cordoned off.