The black Mercedes car suffered significant damages due to the collision. Its front bumper, grille and the rear were completely destroyed.
By : HT Auto Desk
| Updated on: 07 Sep 2020, 13:37 PM 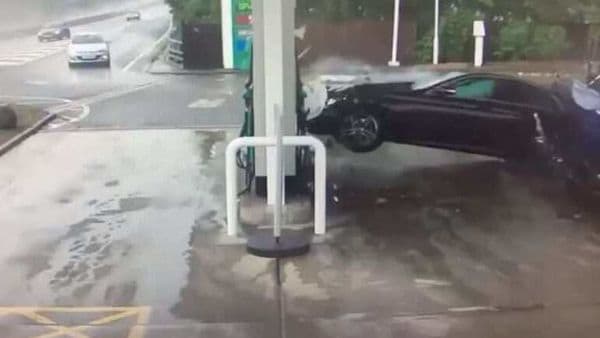 Photo courtesy: Screengrab of a video posted on Facebook by Nick Medhurst

A Mercedes was on a splashy ride of its own when it hydroplaned through a water-covered road and zoomed into a gas station, hitting a fuel pump and a blue pickup parked near by.

The collision that took place in the UK was posted on social media by a man who happened to capture the incident. In the video, the black Mercedes can be seen emerging from a far left lane and hitting a section of water-covered road. The driver seems to have lost the control of the car shortly after that and the car takes a turn of about 90 degrees.

The car's rear end hits the pickup that is parked at the next pump. The Mercedes goes airborne for a fraction of seconds before hitting the ground and coming to a halt.

Soon after, the driver and a passenger of the Mercedes are seen coming out of the vehicle. Fortunately, they seemed to be fine and no injuries could be seen on their bodies. However, the car suffered significant damages due to the collision. Its front bumper, grille and the rear were destroyed.

It is not known if any legal or police action was taken against the driver of the Mercedes or if anybody else at the fuel station got injured.