A video posted on social media shows smoke starts coming out of the engine bay of the Lamborghini Aventador that was being used for cooking meat pieces.
By : HT Auto Desk
| Updated on: 07 Jun 2021, 03:59 PM 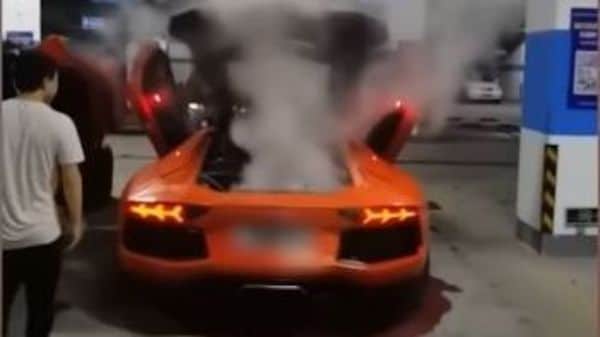 Image: Screengrab of a video posted by a Chinese YouTube channel

There are many reasons to flaunt a supercar, especially when it is a Lamborghini Aventador. But showing off barbeque skills on it is certainly not something you would want to do. An Aventador owner in China's Hunan province recently learnt this the hard way even if it was a horrible idea to begin .

Catching on an absurd internet trend from a few years ago, the man attempted cooking pieces of meat with the flames from the car's exhaust. A video posted on YouTube shows the man squatting down in front of the exhaust and cooking meat pieces on a skewer while another man revs the engine. Yet another man is seen filming him. But soon after, his barbeque session turns into a disaster.

Steam starts coming out of the engine bay and a red coolant from the vehicle starts spreading on the ground. It could be possible that either extensive revving caused the reservoir tank to rupture or the coolant hose burst. The 6.5-liter naturally aspirated V12 engine of the Aventador surely has the ability to spit out flames and for a few seconds but that isn't really meant for BBQ after all.

The video shows the owner immediately standing up and checking on the vehicle. He opens the engine cover to investigate the matter and cool things down. Meanwhile, the smoke doesn't seem to stop coming out, almost blurring the sight of the engine area. Though what happened was unfortunate, it could have been even worse and also fatal. Had it caught fire, the yellow Ferrai parked next to it would also have become a victim of the incident.

A few years ago, a Lamborghini Aventador was recalled because if the fuel tank was overfilled and the owner would rev the car excessively, the fuel vapor could come in contact with the hot exhaust gases and trigger a fire, CarScoops reported.