The incident took place in Leuven, Belgium at the Marie Thumas Bridge. It has been reported that the members of the family didn't face any serious injuries.
By : HT Auto Desk
| Updated on: 06 Nov 2021, 11:06 AM 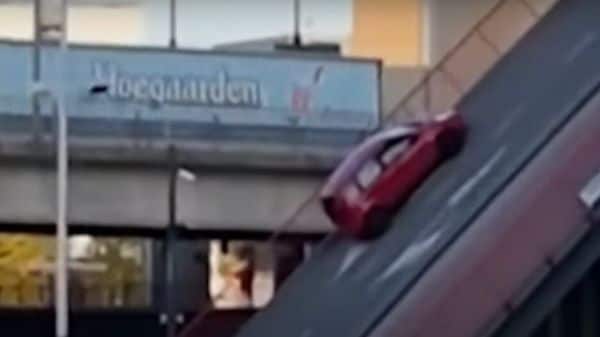 Screengrab from the video posted on YouTube by VanMorgen!

A family had a close shave from being grievously injured or worse when their vehicle got stuck on a bridge that opened up to allow a ship to pass. The incident took place in Leuven, Belgium at the Marie Thumas Bridge over the Vaartkom. The video of the incident that was posted on YouTube received numerous views and comments.

In the video, one can observe that the vehicle was already on the bridge when it started to open and before the driver had any chance to get out of the precarious situation safely, the car started sliding backwards before it slammed on the ground and then rolled onto its roof. As mentioned in a report by Carscoops, the couple in the car with their one-year-old child got trapped in the hatchback and later recused by the team of the local fire brigade. They were taken to a hospital and fortunately none of the members of the family endured any serious injuries.

Carolien Peelaerts from the Flemish Waterway company said the incident was being investigated on local radio. “We are investigating how this could have happened," she was quoted as saying in the report. She also added that the footage from the camera is being investigated and experts will be sent to the site as well. The Brussels Times shared that it is not known if the driver of the car Ignored the warning barriers or if a technical glitch has occurred with the bridge that failed to alert motorists that it was opening to let a ship pass through.

The video of the accident received comments such as no one wants to get stuck in such a situation ever and also appreciated how many locals went ahead to help the family at once.