The carmaker had given the hints in November last year.The Apple CarKey promises to lock, unlock and start a car and replace your regular car key.
By : Sabyasachi Dasgupta
| Updated on: 30 Mar 2020, 04:19 PM 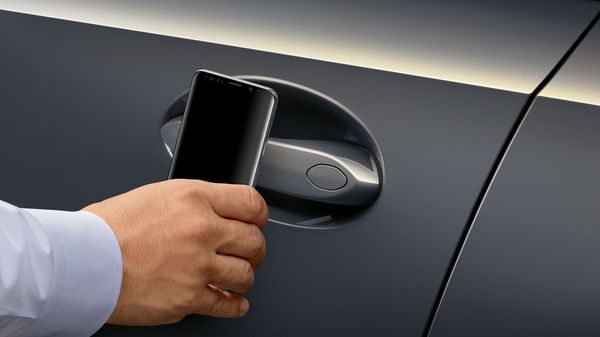 Photo of a BMW Digital Key

When BMW said that it wants to usher in the next Digital Key generation, many wondered what it could be. The company had said that providing customers with 'simple, connected and keyless access' to their vehicles has been a key area of innovation.

Today, it is possible to lock and unlock a BMW car, start the engine and share the key with others using the BMW Digital Key as part of BMW Connected on the smartphone. But it was only the first step in a global technological transformation being shaped and led by the BMW Group.

BMW now awaits for Apple to make necessary updates in the latest iOS to take it to the next level. According to the latest iOS leaks, Apple is working towards a system where your iPhone could become your BMW car key. The development is in its final stage and could soon be a reality.

Incidentally, BMW was also the first carmaker to offer Apple CarPlay before anyone else.

According to reports, the leaked beta version of iOS 13.4 from Apple carries a new feature that can turn your iPhone into a car key to replace your regular ones. The leak referred to something called Carkey API that will be capable to lock, unlock and start a car by just holding the iPhone near the car. BMW referred to this system as ultra-wide band (UWB) technology by which one can unlock the car without holding the mobile phone directly up to the door handle. It is reported that one can manage the Apple CarKey through the company’s Wallet app, work without using Face ID, and share virtual car keys through messages.

This technology is likely to be made public later this year, somewhere around the official launch of the new iOS updates.

When BMW was contacted to confirm the reports, the company published a detailed press release showcasing its intent to use the technology for its future cars.

The press release said, “The Digital Key has the potential to enable a range of use cases that are not possible with a classic vehicle key, due to the technological advantages of smart devices. Uniform technology standards are needed to turn the vision of digital vehicle access into reality. Full functionality must be available on various customer devices from different vendors and regardless of the vehicle manufacturer."

Olaf Muller, head of Development Digital Access Systems at the BMW Group, said, “Our customers want cross-vendor interoperability. Standardisation is the only way to achieve this; proprietary solutions are no longer beneficial."

The company also hinted that they are waiting for the latest UWB technology in near future. It said, “ NFC-based digital key ecosystem has been announced for late 2019. A key feature is the use of a security chip that works separately from the smartphone operating system. This means it also works if the smartphone cannot be started anymore, because the battery is too low. In the near future, Digital Key specification will be enhanced by the ultra-wideband (UWB)-based release 3.0."

The BMW Group recognised early that UWB technology would be beneficial over the long term and suitable for global market penetration. The close cooperation with partners and the fact that UWB is already finding its way into more and more customer devices will pave the way for new and innovative Digital Key features.