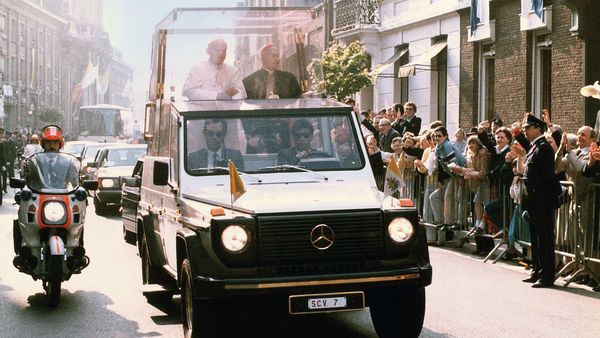 Mercedes-Benz had loaned a modified nacre white 230 G-Class to the Vatican in 1980 for Pope John Paul II's visit to Germany between November 15 and 19 of that year. The modified vehicle then accompanied the pontiff on many of his visits around the globe and colloquially came to be known as the 'Popemobile'.

The classic vehicle's rear was equipped with a bench on a continuous floor panel that was raised by 40 centimetres and was protected by a high, transparent dome made of artificial glass. The modifications helped the Pope remain easily visible for several hundred thousand attending his events, both when he was sitting down and standing up. Golden details and various lights were integrated into the sides, floor and roof of the superstructure, which were used to provide direct as well as indirect lighting and made sure the Pope also remained visible even in the dark. 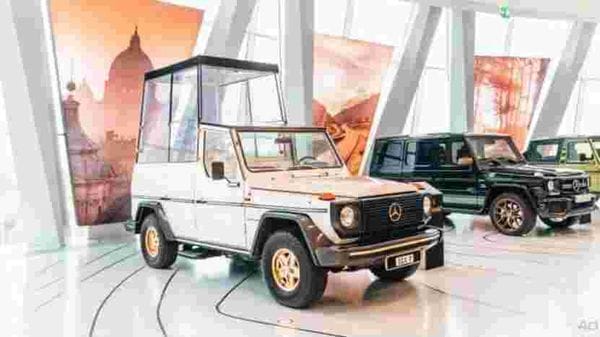 On the occasion of the G-Class’ 40th anniversary, the original Popemobile has been displayed at the Mercedes-Benz Museum in Stuttgart, Germany.

The G model's rear was also equipped with a powerful automatic air conditioning unit that ensured pleasant temperatures within the transparent dome and prevented its panes from fogging up in rain and humid conditions. The transparent dome intended to protect the Pope from the elements without obstructing worshippers’ view of him and was initially designed as a removable unit.

However, following the attempt to assassinate the Pope in 1981, the G model was converted and equipped with bulletproof glazing. Mercedes-Benz adapted the pontifical G-Class’ equipment to the Vatican’s updated safety specifications in 1983 and again in 1985. The vehicle is powered by a four-cylinder petrol engine generating 75 kW (102 hp). The automatic transmission and a comfortable chassis and suspension guarantee a smooth ride, even in challenging terrain. The classic vehicle's rear was equipped with a bench and a high, transparent dome made of artificial glass.

Mercedes made a second identical vehicle in 1982 on the basis of the 230 GE. In the same year, the carmaker permanently handed over both the vehicles to the Vatican. The original Popemobile was returned in 2004 and has since been part of the Mercedes-Benz classic collection in Germany.

On the occasion of the G-Class’ 40th anniversary, the original Popemobile has been displayed at the 'G-Schichten' special exhibition at the Mercedes-Benz Museum in Stuttgart, Germany, until September 2020. The museum is open to visitors from Friday to Sunday between 9 am to 6 pm.