Tesla eventually plans to make as many as 500,000 vehicles at the Germany factory, alongside production of battery cells.Tesla has targets of making between 5,000 and 10,000 electric vehicles vehicles every week at the factory by the end of next year.
By : HT Auto Desk
| Updated on: 10 Oct 2021, 10:00 AM 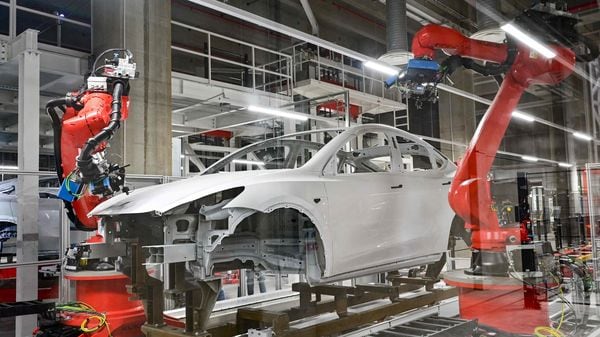 Production of the Tesla Model Y during the opening of the new Gigafactory of US carmaker Tesla in Gruenheide, east of the German capital Berlin.

Tesla CEO Elon Musk has plans for the electric-car plant near Berlin to start producing vehicles as early as next month even as the company is still awaiting final approval due to various legal challenges, Bloomberg reported.

Tesla's Germany factory will manufacture Model Y electric sedans in November or December, Musk said during his visit to the facility in Gruenheide, where Tesla hosted thousands of locals at a county fair. The factory will likely source batteries for electric vehicles from Tesla’s facilities in China until a battery cell factory in Germany is completed.

Musk also highlighted that starting of volume production will be the hard part, adding that Tesla has targets of making between 5,000 and 10,000 electric vehicles vehicles every week at the factory by the end of next year. “We are going to need a lot of talented, hardworking people to get there," he said, as quoted by Bloomberg.

The factory is in its final stretch of construction but is still awaiting final approval for the project that is key part of its European expansion plans. With Tesla's new facility, Germany will benefit from new jobs.

Progress of Tesla's Berlin factory has not been smooth as the carmaker has been struggling with lawsuits from environmental groups concerned about water use and wildlife. This has even led the construction and production of the plant to get delayed by several months. Tesla eventually plans to make as many as 500,000 vehicles at the factory, alongside production of battery cells.

Locals alone have filed more than 800 complaints against the factory that are currently being discussed via an online consultation process that will last until October 14. The region’s environmental authorities have vowed to make a decision on final approval only after that process ends.