Family of a Tesla driver has alleged that the Model 3 he was driving had a defective and unreasonably dangerous suspension.
By : HT Auto Desk
| Updated on: 17 Feb 2022, 09:56 AM 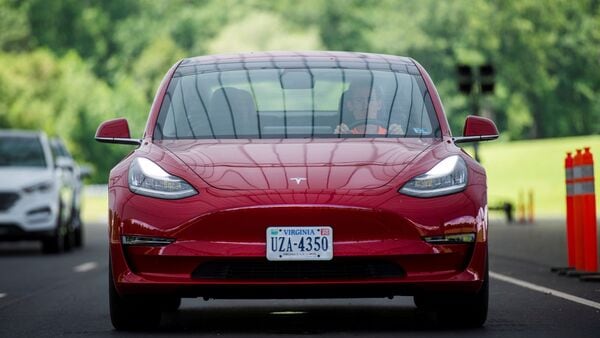 EV maker Tesla has been sued by the family of a driver who got killed in an accident involving a 2021 Tesla Model 3 last year in Florida. The reason of the fatal crash is alleged to be suspension failure, resulting in the death of the driver and a passenger. The crash also triggered a federal probe.

The family which filed the lawsuit in a Florida state court last week, alleged that the Model 3 had a "defective and unreasonably dangerous suspension that may cause loss of control during ordinary and foreseeable driving conditions". The case was first reported by legal information site Plainsite.

(Also read | Tesla has to buy $500 mln of local parts in India to get import tax cut: Report)

The lawsuit stated that four days before the accident in September, the driver, Nicholas G Garcia, had taken the vehicle to a Tesla Store due to problems with "controllability/steering, suspension, battery and electronic system, and an ability to open the doors."

As per the National Transportation Safety Board, which is probing the accident, a preliminary report in November showed that the car was speeding before crashing into two trees and consequently catching fire. After the crash, Garcia, 20, and front-seat passenger Jazmin Alcala, 19, sustained injuries and "traumatic life ending burns," according to a Coral Gables Police Department report.

The police report stated that the vehicle's under-body struck the roadway after going over a "hump" in the center of an intersection. The driver lost control and drove off the roadway before the collision.

In October, Tesla recalled nearly 3,000 2020-2021 Model Y and 2019-2021 Model 3 vehicles in the US over a suspension issue. While the company recalled 21,599 China-made Model Ys in December, saying that a suspension link may fall out of the steering knuckle under extreme stress conditions. Additionally, the US National Highway Traffic Safety Administration opened an investigation into around 115,000 Model S and Model X units in 2020 over a front suspension safety issue.