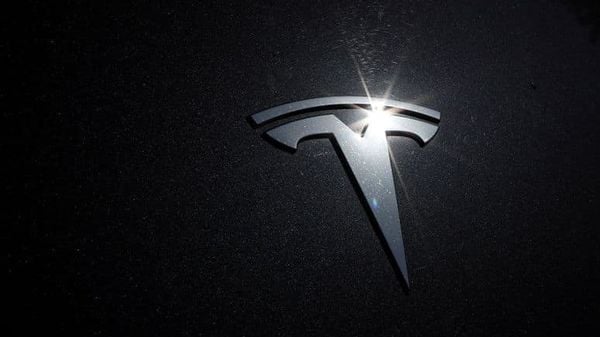 The Tesla logo is seen on a car in Los Angeles, California.

After a torrid rally that saw shares more than double since early May, Tesla Inc. is taking a pause on Wednesday, even as the broader market rises on the hopes for a coronavirus vaccine.

Tesla shares dropped as much as 3.9% to $1,457 in New York on Wednesday, as the S&P 500 Index rose as much as 1.3%. The electric vehicle maker is now worth in excess of $275 billion, having increased by more than the equivalent of Caterpiller Inc.’s entire market value in just this month.

“The question becomes, where do the positive deltas come from now?" Roth Capital analyst Craig Irwin said. Investors expect more good news in the near future, including an entry into the Indian market, announcement of an electric mini-car and a possible inclusion into the S&P 500 Index. But the current valuation already takes that into account. It is “hard to come up with something that drives it much higher right now," Irwin added.

The optimism around Tesla had also lifted the stocks of other smaller electric vehicle companies, such as Nio Inc., Workhorse Group Inc., Electrameccanica Vehicles Corp. and Nikola Corp., all of which were down on Wednesday, with the exception of Nikola. The share price of these companies have risen at least three-fold over the past three months, with Workhorse jumping 674%.

“There is a risk-off trade happening in Tesla heading into earnings next week with profitability a lingering question," Wedbush analyst Daniel Ives said, adding that the stock has had a “performance for the history books, the bulls are hedging their bets."

While Tesla’s second-quarter delivery numbers impressed analysts, even the optimists have found themselves hard-pressed to explain the explosive rise in the share price.

“We have made efforts to identify the source of such extraordinary levels of volume, but admittedly, it is not entirely clear to us where the bulk of the volume is originating," Morgan Stanley analyst Adam Jonas wrote in a note on Tuesday. “One client said there appears to be ‘bigger forces at work’ in this market and for a variety of reasons the Tesla equity instrument has been anointed the ‘chosen one.’"