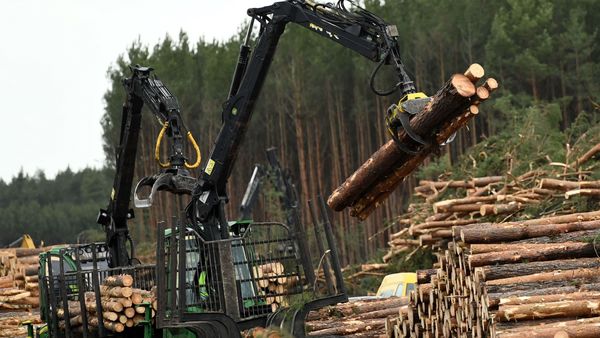 File photo: German municipality Gruenheide's mayor has said Tesla should be able to start work on the foundation of its factory near Berlin next month after having cleared trees at the site.

The U.S. carmaker should be able to start work on the foundation next month after having cleared trees at the factory site in the small town of Gruenheide and leveling the ground for construction, Arne Christiani, the town’s mayor, said Wednesday.

“Work should be able to continue soon," Christiani said, adding that the coronavirus isn’t expected to disrupt construction because most of it is done with large machinery and few workers, allowing for distancing.

Chief Executive Officer Elon Musk is pursuing an ambitious timetable by targeting mid-2021 for the plant to start producing Model 3 sedans. Demand for Teslas is likely to be bolstered by tighter emissions regulations taking full effect by then. German officials have assured the electric-car maker that its project will be fast-tracked through the country’s notorious bureaucracy.

Musk, 48, probably will give an update on the status of the plant when Tesla reports first-quarter results Wednesday after the close.

Tesla got a first taste of the risks when a court stopped work on clearing the site in February. The hiccup, though short-lived, sent shock waves through Berlin, where Tesla’s factory has boosted confidence in Germany’s ability to attract international investment. Last month, the coronavirus pandemic caused authorities to cancel a public hearing that’s key to the project’s approval.

Local officials on Wednesday said the hearing may be held virtually after Chancellor Angela Merkel’s cabinet of ministers backed a bill that would allow such forums to take place online.

When complete, the factory will employ up to 12,000 people and assemble as many as 500,000 vehicles annually. Tesla is moving into Germany’s heartland to vie with Volkswagen AG, BMW AG and Daimler AG’s Mercedes-Benz as the country targets a massive increase in electric-car sales.

Tesla, which earlier this month paid 43.4 million euros ($47.1 million) for the Gruenheide site, indicated it will send authorities revised planning documents shortly to account for planned changes in construction, according to Axel Steffen, a local official in the Brandenburg state environment ministry.

Those new plans are also expected to address concerns about the amount of fresh water needed, after local groups complained that the plant will consume too much in a region already drying up.

“If a desert forms in Brandenburg, then surely it will not be because of Tesla," Vogel told lawmakers during a hearing in Potsdam.