Tesla gets go-ahead to resume clearing forest in Germany

Tesla will also have to scare off or relocate wolves, bats, snakes, ants and lizards until construction is over. Under German regulations, the project must consider the breeding period for local wildlife in spring.
By :
| Updated on: 21 Feb 2020, 09:25 AM 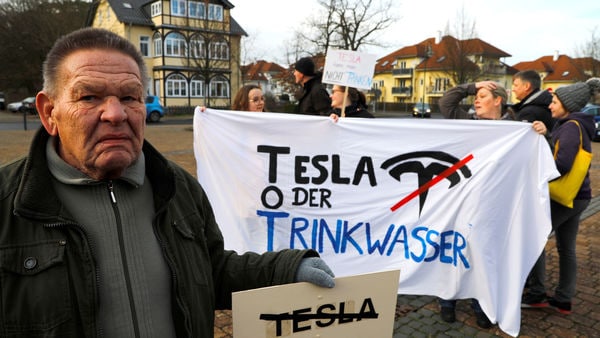 Tesla Inc. has overcome a legal roadblock standing in the way of Elon Musk’s plan to build an electric-car factory in Germany.

A Berlin-Brandenburg court on Thursday ruled that Tesla can resume cutting down trees at a forest site in the small town of Gruenheide to make way for its first assembly plant in Europe. That puts the U.S. carmaker on track to start construction before the start of a crucial breeding period for local wildlife in March.

The court found that local authorities didn’t violate laws when they allowed work on the factory to start, throwing out a complaint by Gruene Liga Brandenburg, an environmental group that claimed Tesla and local authorities were sidestepping regulations to rush the project.

The decision is a boon to Tesla’s ambitious timetable to have the plant up and running by the middle of next year. The company plans to eventually produce as many as 500,000 cars a year at the site, employing 12,000 people and posing a serious challenge to Volkswagen AG, Daimler AG and BMW AG.

Musk, Tesla’s chief executive officer, recently tried to ease local concerns about water usage at the plant, which would border a nature reserve.

Local officials had warned that construction could be delayed by six to nine months if the forest isn’t cleared by mid-March. Tesla has already cut down two-thirds of the trees and should be able to fell the remainder in time.

Brandenburg’s environment ministry this month gave Tesla a preliminary green light to start cutting down trees in an area equivalent to 100 soccer fields ahead of granting final approval. The court stopped the process with an injunction on Feb. 15. By late Thursday, the appeals court ruled that legal requirements to allow early construction were met.

Gruene Liga has warned that Tesla’s plant could threaten the region’s water supply and overburden local transport infrastructure. The group argued that authorities shouldn’t have allowed the forest to start being cleared until after March 5, the deadline set for environmental groups to comment on the project.

Local officials argue the site is an inferior pine forest planted to be harvested in the first place. The planned factory is of “great significance" to climate change prevention and one of the most important industrial investments in eastern Germany “in a long time," Economy Minister Peter Altmaier told German publisher Funke Mediengruppe this week.

The factory will be designed with “sustainability and the environment in mind," Musk said last month on Twitter, adding Tesla will plant three new trees for every one cut. The company still needs final approval for the project from authorities in the state of Brandenburg.

Tesla will also have to scare off or relocate wolves, bats, snakes, ants and lizards until construction is over. Under German regulations, the project must consider the breeding period for local wildlife in spring.