Tesla pushing Volkswagen to speed up EV plans, but not 30,000 job cuts

According to a report published by German newspaper Handelsblatt, Volkswagen CEO Herbert Diess wants its main plant to convert to produce only electric cars, and suggests cutting up to 30,000 jobs to which his supervisory board members, taken by surprise, protested vigorously.
By : HT Auto Desk
| Written By : Sabyasachi Dasgupta
| Updated on: 13 Oct 2021, 03:53 PM 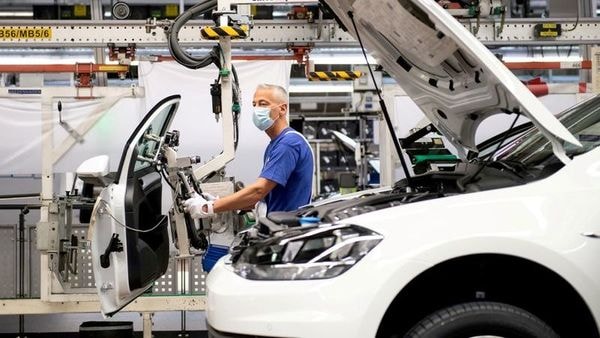 Volkswagen is trying to clear air about a recent controversy surrounding reports that it may reduce its workforce by 30,000 at its largest facility in order to convert it into an electric-only vehicle production centre. A German newspaper cited a Volkswagen supervisory board meeting details where, it claims, CEO Herbert Diess suggesting these changes which did not go down well with others.

Volkswagen issued a statement today, denying reports that there will be 30,000 job cuts. However, it accepted that the Wolfsburg facility needs to scale up to meet its future requirements. The company said that new rivals in the German auto market like Tesla has pushed it to speed up plans to transform its main plant towards producing electric vehicles.

Michael Manske, Spokesperson for Volkswagen, issued a statement today, saying, "There is no question that we have to address the competitiveness of our plant in Wolfsburg in view of new market entrants," with hints towards Tesla and Chinese carmakers like NIO which launched in Norway recently.

Manske added, "Tesla is setting new standards for productivity and scale in Grunheide." He referred to Tesla's first European Gigafactory, which is being constructed near Berlin. When operational, the facility is expected to have peak capacity between 5,000 to 10,000 cars every week, which itself is more than twice of what the entire EV production was in the country last year.

Denying the job cut report published in Handelsblatt today, Manske said, "A debate is now underway and there are already many good ideas. There are no concrete scenarios." The Volkswagen's workers' council also denied such reports calling it ‘absurd and baseless’.

Handelsblatt had reported that Volkswagen CEO Herbert Diess had suggested cutting up to 30,000 jobs to which his supervisory board members, taken by surprise, protested vigorously.

German carmakers are currently playing catch up with EV makers like Tesla. Volkswagen, one of the biggest carmakers in the world, recently unveiled its electric vehicle plans. It already has the ID.3 electric car, a rival to Tesla Model 3. The carmaker also has ID.4 electric which recently won the World Car of The Year award. It will soon come out with the ID.5 electric car too.

Volkswagen's Wolfsburg plant is the largest in the world. It currently has more than 50,000 employees to manufacture ICE vehicles. Volkswagen aims to manufacture the Project Trinity electric sedan from this facility from 2026, for which it requires to undergo modifications.