Home Auto News Tesla Entering India? Why It Is Still Too Early To Charge Up Celebrations

Tesla entering India? Why it is still too early to charge up celebrations

Tesla CEO Elon Musk said in a reply to a tweet that an India entry is in 2021. There is no official statement yet.Tesla entry may not necessarily mean in terms of an EV but could be about an R&D facility near Bengaluru. Again, no official statement on this yet.
By : HT Auto Desk
| Updated on: 06 Oct 2020, 09:09 AM

Tesla has perhaps been one of the most eagerly awaited car makers in India with past years seeing several instances of hints of the American company planning to enter the market without much actually happening. Speculations have been aplenty but Tesla CEO Elon Musk, in a reply to a tweet, said the EV maker will enter India in 2021 'for sure.' Even as there was a collective euphoria among EV supporters and fans of Tesla, there is reason to calm the celebrations. At least for now.

The ground reality perhaps is that it could be longer than just a year to see Tesla vehicles zooming on Indian roads. Tesla's entry into India, if it does take place, does not automatically mean opening of showrooms and selling of cars. The car maker is reportedly in talks to establish an R&D center in Bengaluru with its officials apparently in talks with the state government. An India entry, as mentioned by Musk, could be about this as well.

Another key factor that may deter Tesla from actually driving in its products here is the infrastructure concern. Volkswagen, one of the world's largest car makers and a rival of Tesla, had already said that it doesn't have plans of bringing EVs to India yet and that it is currently observing the ground realities. "We always have an observation on what happens in India. We have a plant in India with our company Skoda. We have combined 'production society' there, where we want to produce combustible cars for India. At the moment, there is no decision taking to bring the MEB to India," VW Brand CEO Ralf Brandstatter said. (Read more here)

While the central and state governments are moving towards a future with electric vehicles on city and highway roads, experts agree it will take a few years at the very least for India to establish itself as a country which has the infrastructure to support EVs. 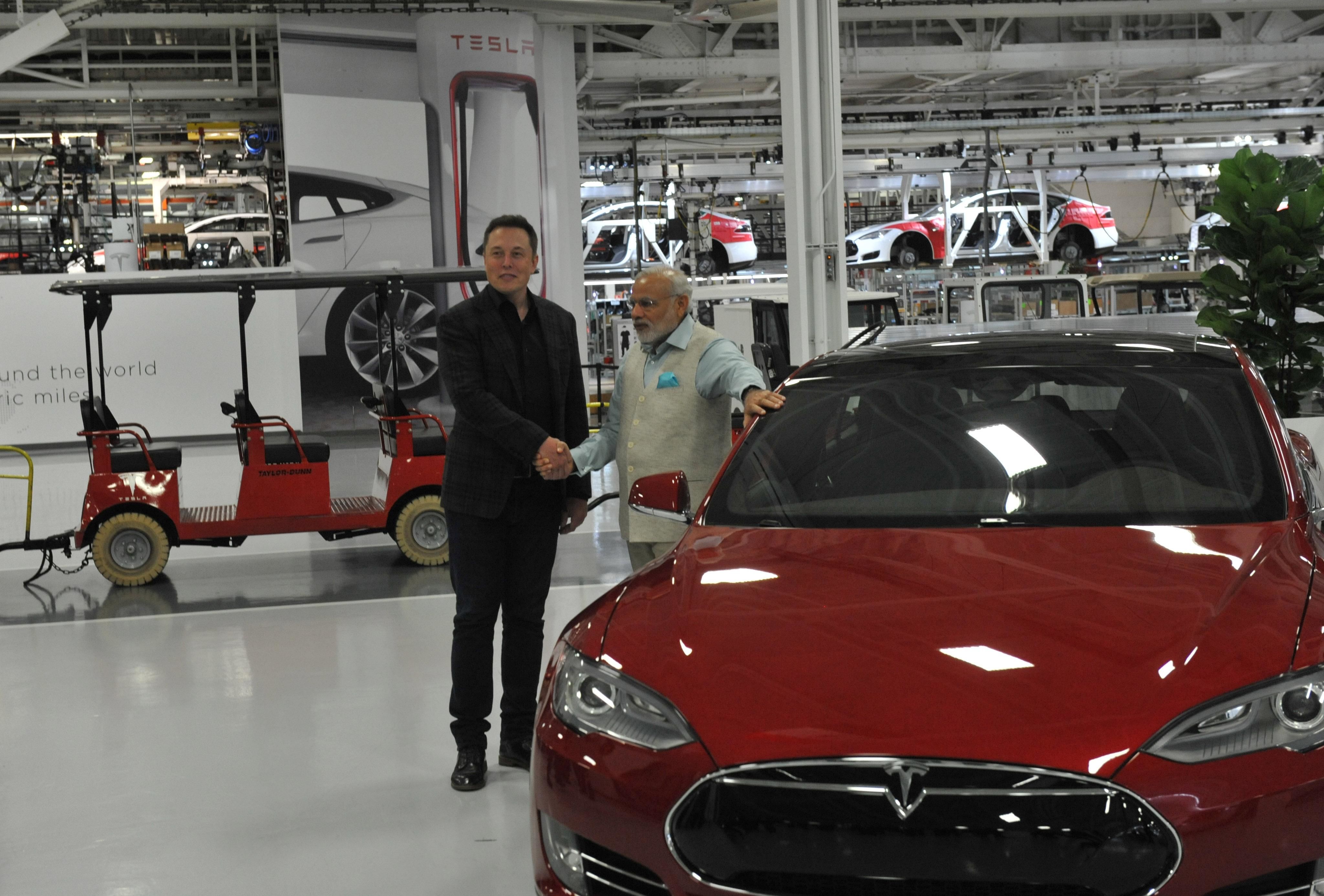 This photo was tweeted by @narendramodi back in 2015 when he was shown around the Tesla facility in California by Elon Musk.

Third, and perhaps most importantly, volume is a key focus area for Tesla and it managed to touch giddy heights in China - the world's largest EV market - also because it managed to start production from its first non-US plant located in Shanghai. Local production coupled with government incentives and a cult-like following has helped the company beat down local rivals here. Do these factors also exist in India? Perhaps.

Even if Tesla enters the Indian market with its EVs, these are expected to be beyond reach of the masses unless the government announces massive incentives and/or Tesla is able to start local production. And while the former is still a possibility considering the priority being given to EVs here, local production is a whole other ball game. In August of last year, Musk had said government regulations in India make it tough for Tesla to manufacture cars.

At a time when Model 3 is continuing to rule the EV world and Musk is planning on an even more affordable offering, affordable can be a subjective term for buyers in different countries. And in a price-sensitive country like India, it could be an uphill climb for Tesla to truly establish a firm foothold - not just against the few EVs already here but against regular cars running on petrol or diesel