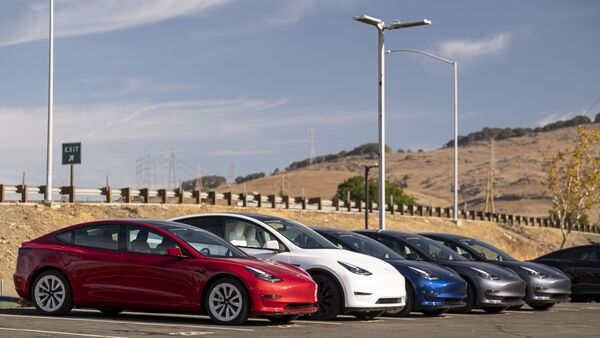 US EV giant Tesla has reported record electric vehicle deliveries for the first quarter of 2022, largely meeting analysts' estimates by delivering 310,048 vehicles. However, the company's production fell from the previous quarter due to supply chain disruptions as well as production suspension at China plant.

Delivery of 310,048 vehicles in the quarter by Tesla was a slight increase from the previous quarter, and up 68% from a year earlier. The company sold a total of 295,324 Model 3 sedans and Model Y sport utility vehicles, while it delivered 14,724 Model S luxury sedans and Model X premium SUVs.

Analysts at Wall Street had expected deliveries of 308,836 cars from Tesla in the first quarter, according to Refinitiv data. "This was an exceptionally difficult quarter due to supply chain interruptions and China zero Covid policy," CEO Elon Musk had tweeted, adding, "Outstanding work by Tesla team and key suppliers saved the day."

On the other hand, the company produced 305,407 vehicles from January to March this year, which was down from 305,840 units in the previous quarter. Yet, the carmaker has navigated the pandemic and supply chain disruptions better than rivals with its new Shanghai factory driving growth.

Earlier this month, Tesla also started deliveries at its factory in Gruenheide, Germany, and deliveries of cars made at its plant in Austin, Texas, are to begin in the near future. Musk himself oversaw deliveries of first batch of made-in-Germany vehicles to customers at a handing over ceremony held at its Berlin Gigafactory.

Further, the company's stock soared after Tesla this week revealed plans to seek investor approval to increase its number of shares to enable a stock split. Tesla shares have risen about 3% so far this year, while GM and Ford shares have declined.