Home Auto News Tesla Cybertruck Can Come In Any Colour As Long As It's Nothing, Says Elon Musk

Tesla Cybertruck can come in any colour as long as it's nothing, says Elon Musk 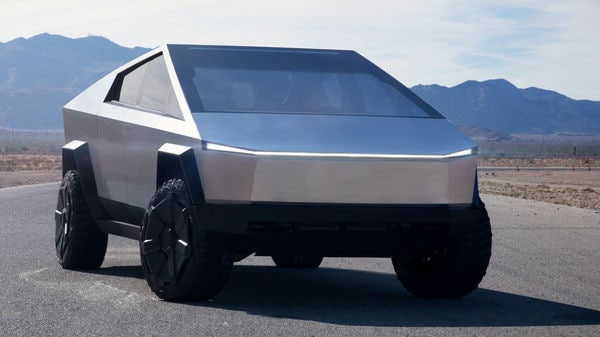 Tesla CEO Elon Musk has confirmed that Tesla has no plans to offer any colour or wrap for the Cybertruck at least at the first go. He has said that Tesla Cybertruck can come in any colour- as long as it is nothing.

The Tesla Cybertruck comes with a stainless-steel exoskeleton that promises to offer the owner and passengers the utmost durability and protection. The EV company has shared that every component of the electric truck has been designed to extend superior strength and endurance to the electric vehicle, be it from Ultra-Hard 30X Cold-Rolled stainless-steel structural skin to Tesla armour glass.

(Also read | Elon Musk is on a spree to sell Tesla shares, offloads another 934,091 stocks)

Previously Musk had stated the owners of the Cybertruck would need to apply a wrap to the EV to give it any other colour than the steel one. He also went ahead at a time to suggest that Tesla could offer factory wraps for the electric Cybertruck. Though, now with the latest statement, it might seem that this offer is not on the cards of the company at present.

Unveiled in 2019, the production of EV got pushed to 2022, however, the Tesla Cybertruck has been spotted undergoing testing with some design updates. A video that has surfaced shows the EV undergoing track testing features a massive windshield wiper and side mirrors, something that the prototype did not have. Though the company is developing an electromagnetic wiper system with a single blade, it is yet to be confirmed that the updated feature possesses this technology.

Musk had also revealed that the updated version of the electric truck will offer four-steering along with four electric motors. Based on recent numbers, the Tesla Cybertruck has got reservations of over one million.