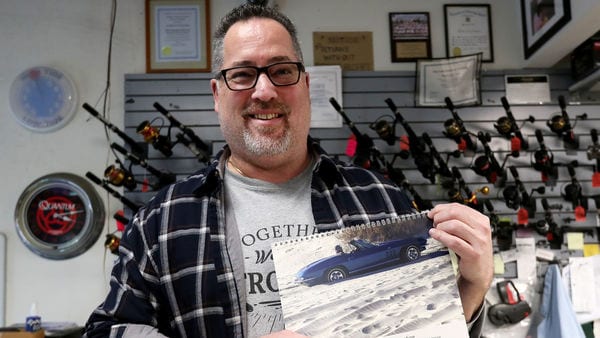 Driving onto a sandy beach on the Jersey Shore seemed like a brilliant idea. Reality proved otherwise.

A Corvette, BMW, Cadillac, several minivans and other autos - their tires sunk in sand and ocean waves lapping perilously close - are each a monthly feature of the "Beached Cars of Brigantine" 2020 calendar.

The $25 item has repeatedly sold out this year and is on reorder again a week before Christmas, said Andy Grossman, a bait-and-tackle shop owner in Brigantine, New Jersey, who organized the first-ever sale of the calendar, with proceeds going to help needy local families.

Grossman also operates a part-time tow truck business that rescues beached autos - but not without a photo first.

"This time of year, everyone is happy except for 12 people," he said.

Calendar orders flooded in from Washington state, California and Florida, where sands at Daytona Beach are hard enough for vehicles, which are welcome to cruise along the waves during daylight hours.

"But here we have signs all over, there is nothing that says cars are allowed. A car has no shot. That's why I think these guys are fair game," Grossman said.

For the most part, the decision to drive onto the Jersey Shore's soft sands is rooted in ignorance.

"I've been taking these pictures over the years and people keep joking, 'There's another one for the calendar.' So I thought I'd try it," he said.

Some customers were disappointed to learn that the calendar failed to include a New York City yellow taxi that got stuck in the sand about three years ago, before Grossman owned the tow-truck business and started photographing his rescue missions.

But there is always the promise of more rescues to come.

"People are asking me if they can reserve for next year," Grossman said.