Porsche stated that sales of its all-electric Taycan model have moved past sales of Porsche 911 by a few hundred cars in the year through September. About 28,640 units of the Porsche Taycan EV were sold.
By : HT Auto Desk
| Updated on: 16 Oct 2021, 12:07 PM 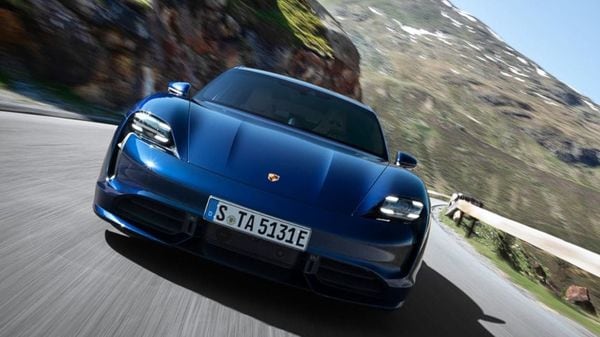 Porsche all-electric Taycan model has outsold the company's 911 combustion car for the first time reinforcing the automaker's steady progress towards its electrification goals. Porsche announced that the sales of Taycan sedan, rivaling Tesla Model S, passed sales of Porsche 911 by a few hundred cars in the year through September, stated a report by Bloomberg. About 28,640 units of the EV were sold. The overall deliveries increased by 13 per cent during the first nine months of this year.

Porsche sales chief Detlev von Platen said in the statement that since the order books are filled, the company is excited about the final few months of the year. “Nevertheless, the situation on coronavirus globally remains volatile and we’re facing significant challenges on the supply of semiconductors," he was quoted saying in the report. Porsche also introduced a more spacious version of the Taycan EV this year.

The brand endured the global semiconductor shortage during the first nine months of 2021 relatively well as it made total deliveries of about 2,17,198 vehicles. Sales of the Porsche saw a surge in the United States, its second-largest market after China. The deliveries in the former increased by 30 per cent. Porsche Cayenne SUV and its Macan models remained the automaker's bestsellers as each registered sales more than 60,000 units.

Porsche had also stated earlier that the company aims to convert around 80 per cent of its vehicles into electric vehicles by 2030. The brand shared in earlier reports that it is planning to create fully electric Porsche 718 Cayman and Boxster models by 2025 though it has shared that there lie certain challenges in this process. Porsche also wants to bring a pure battery-powered version of the Macan SUV by 2023.