Home Auto News Only In Hollywood: This $62 Mn House With 15 Car Garage Is A Temple Of Speed

Only in Hollywood: This $62-mn house with 15-car garage is a temple of speed

Kipp Nelson, a former Formula Three racer, bought the house in 2014 and turned it into a sanctuary to showcase his collection of cars, run a miniature race track besides having a Formula One race simulator as well.
By : Sabyasachi Dasgupta
| Updated on: 05 Jun 2020, 01:10 PM 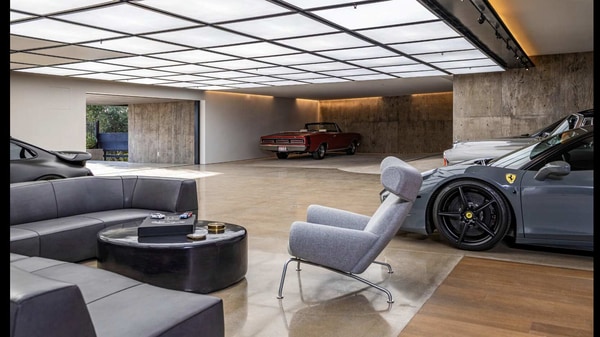 Sports and luxury cars ranging from Ferrari to Mercedes parked indoors in what appears more like a showroom with fancy lights and a lounge area. (Photo courtesy: 131collingwood.com)

Los Angeles is home to some of the most expensive and luxurious cars in the world. More often than not, these cars hit the streets of LA - a favourite of many enthusiasts for luxury and supercar spotting.

It’s probably only apt that the city would also have some of the most out-of-the-world garages to park these super expensive vehicles.

Take for instance a house in western Los Angeles owned by Kipp Nelson, a former Formula Three racer. Priced at a jaw-dropping 62 million dollars (around ₹467 crore), this palatial house has a showcase garage to park 15 cars. Nelson has kept 12 expensive luxury and sports cars he owns.

Pictures of the garage, along with the house, have been posted on property sites in the US, giving a peek into what this exquisite garage is all about. It shows sports and luxury cars ranging from a Ferrari to Mercedes parked indoors in what appears more like a showroom with fancy lights and a lounge area. One can also find a classic convertible, possibly a Pontiac, on the far corner of the room. The $62 million house also has a miniature race track and a Formula One race simulator. (Photo courtesy: 131collingwood.com)

If this is not enough, the house has a separate room which has a miniature version of a race track. It is as detailed as it can get, and can host a toy Grand Prix if one gets a bit ambitious. And this racetrack is named Kippway, after the name of the owner. In another corner there is a Formula One racing simulator as well.

Nelson had bought this house in 2014 for $12 million and took at least four years to design it to his liking. Being a former race driver, he had to redesign the interior to showcase some of the most expensive cars he owns.