Home Auto News No Road Ahead: This Ford Mustang Crashes Down Stairs In Canada

No road ahead: This Ford Mustang crashes down stairs in Canada

The accident took place at the University of British Columbia (UBC) in Vancouver. Report suggests that the Ford Mustang's underside suffered damages.
By : HT Auto Desk
| Updated on: 05 Sep 2021, 06:00 PM 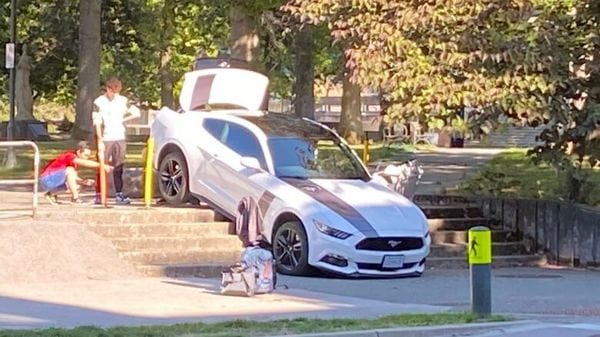 A Twitter post showing a weird accident where a Ford Mustang was involved has gone viral. The accident took place at the University of British Columbia (UBC) in Vancouver where one can see the white Mustang parked on a row of steps leading to a pedestrian crossing.

It is being speculated that the driver must have mistakenly driven the car down the staircase assuming it to be road, said a report. Many are guessing that the person might have been distracted while driving, hence unable to gauge that the road had ended. However, there has been no report of any grievous injury due to the accident.

(Also | Watch: This Lamborghini Huracan STO was rented and then crashed)

We are spending the day at UBC today but found this odd situation. I wonder what happens now. @NEWS1130 @CKNW @CTVVancouver pic.twitter.com/1fmqbGFwJG

From the pictures that have been circulated on the microblogging site, it appears that the car did not endure too much damage, but one can surely guess the harm done underside the Mustang. One can fairly say that the underside did get significant scratches and dents. One cannot rule out the damage done to the exhaust of the car. After the post went online, many users of the site commented it to be hilarious. However, a few went ahead and shared that this is not the first time such an accident has occurred and shared pictures of previous incidents.

In another media report, a spokesperson from the university said that the matter was under investigation. “We’re aware of the incident and are reviewing it as we look to improve safety on our campus," the spokesperson was quoted saying in the report. The spokesperson also added that since the university was reopening from 7 September, the hustle-bustle will be much more and hence drivers must stay attentive while drive considering pedestrian pathways.