More than 1.5 lakh vehicles crossed Atal Tunnel since its opening 5.5 months ago

The 9 km-long bi-directional Atal Tunnel highway is at more than 10,000 feet above sea level.It reduces distance between Manali and Leh by 46 kilometres and the time by about four to five hours.
By : HT Auto Desk
| Updated on: 16 Mar 2021, 15:46 PM 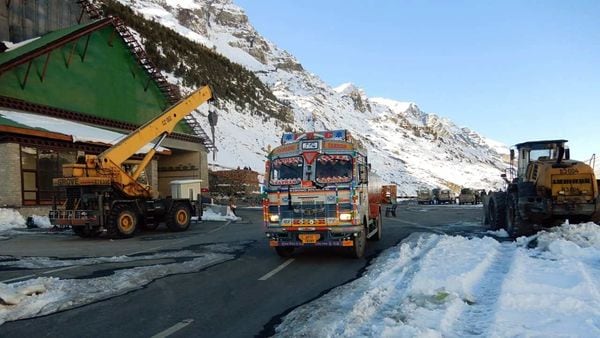 The world's longest, all-weather 365-days highway tunnel connecting Kashmir valley and Ladakh, the Atal Tunnel, has been crossed by more than 1.5 lakh vehicles since it was inaugurated in October last year.

Despite being closed for civilians for several days in January due to snowfall, the tunnel that stretches across the 13,058-ft-high Rohtang Pass near Manali, attracted a large number of vehicles, especially tourists ones, as told to PTI by Kullu Superintendent of Police Gaurav Singh. He added that the tunnel has become a prime tourist destination since it was thrown open to the public.

On an average, the tunnel is crossed by around 950 vehicles each day but it saw the passage of around 3,590 vehicles last Saturday - the highest in a single day till then this year, Singh said. Earlier, on December 27 2020, the passage was crossed by a record number of 5,450 vehicles - highest till date.

The Police Superintendent further said that a total of 362 vehicles have been fined for various traffic rule violations inside the tunnel till February this year - 87 for over-speeding, 65 for rash driving and 210 for other traffic rule breaches.

The speed limit at the tunnel's entrance has been fixed at 40 km per hour and that inside tunnel at 60 km per hour. Digital speed indicators have been installed through the tunnel for consistently reminding drivers of their speed. The traffic violations are being kept in check with the help of automatic vehicles' number reader cameras and motor-bike borne traffic interceptors that have been installed inside the tunnel.

The 9 km-long bi-directional highway tunnel that is at more than 10,000 feet above sea level, reduces distance between Manali and Leh by 46 kilometres and the time by about four to five hours. It has been designed for traffic density of 3,000 cars and 1,500 trucks per day.