On Sunday, 2,800 vehicles entered the Atal tunnel from the Manali side while 2,650 came from the Lahaul side.The all-weather tunnel beneath the 13,058-foot-high Rohtang Pass in Himachal Pradesh was inaugurated in October this year.
By :
| Updated on: 28 Dec 2020, 09:15 AM 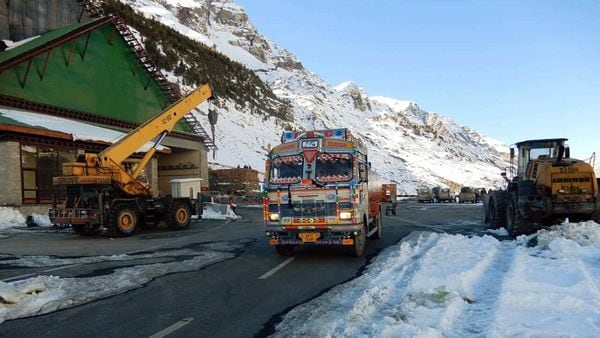 A record number of 5,450 vehicles crossed the Atal Tunnel, an all-weather road beneath the 13,058-foot-high Rohtang Pass in Himachal Pradesh, on Sunday, a senior police officer said.

While 2,800 vehicles entered the tunnel from the Manali side, 2,650 vehicles came from the Lahaul side, he said, adding that this was the highest number of vehicles using the road on a single day since its inauguration in October.

Meanwhile, the police arrested 15 tourists, including seven from Delhi, and seized two vehicles on Sunday for obstructing traffic inside the tunnel, Kullu Superintendent of Police Gaurav Singh said.

It was a bumper-to-bumper traffic and a 'no-overtaking zone' was enforced between Palchan and the south portal of the tunnel to ensure smooth flow of vehicles, he added.

On December 24, 10 tourists from Delhi were arrested and their three cars were impounded as they had stopped their vehicles inside the tunnel, played music and started dancing which led to a traffic jam.

The world's longest tunnel at an altitude of 10,040 feet, Atal Tunnel has become a tourist destination since it was thrown open to the public by Prime Minister Narendra Modi in October.

The 9.02-km underpass connects Lahaul of Lahaul-Spiti district and Manali of Kullu district in Himachal Pradesh.