Atal Tunnel has seen incidents of several tourists clicking selfies and speeding in complete disregard to road rules and safety procedures.
By : HT Auto Desk
| Updated on: 07 Oct 2020, 09:43 AM 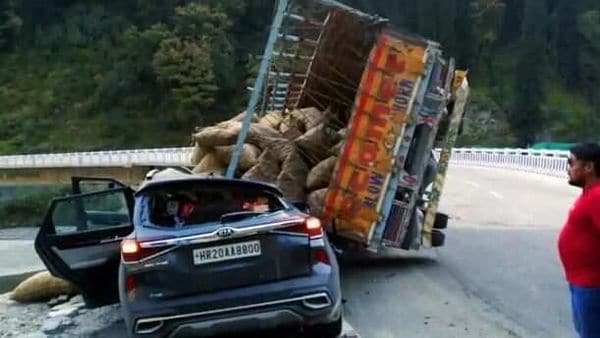 This HT photo shows a truck turned mid-way over a passenger vehicle near the Atal Tunnel.

Atal Tunnel was recently inaugurated among much fanfare by Prime Minister Narendra Modi and while its strategic importance and convenience for motorists is raved about, it has also witnessed three accidents in three days since being opened. Officials have blamed 'reckless tourists' for these accidents and have said that increased safety measures are being employed to eliminate such instances.

Atal Tunnel is the world's longest highway tunnel at above 10,000 feet and significantly brings down driving distance and duration between Manali and Leh. And while the 9.02 km-long all-weather tunnel does reduce driving time by around four to five hours, there is hardly any need to speed through it. However, some motorists have reportedly chosen to disregard rules and have been found guilty of either excess speeds, clicking selfies or both. A Hindustan Times report quotes Brig KP Purushothaman - BRO chief engineer for the tunnel - as saying that negligent tourists were to be blamed for the recent accidents and some even creaated a ruckus inside. "This indecent behaviour by the tourists was caught on cameras installed inside the tunnel," he added.

Purushothaman has said he has taken up the issue with superintendents of police (SPs) of Kullu and Lahaul-Spiti for stricter traffic management and enforcement of safety in the tunnel which itself features a long list of measures to ensure a secure passage. This includes telephone connections at every 150 Mtrs for emergency communication, auto incident detection system with CCTV cameras at every 250 Mtrs, air quality monitoring at every 1 Km, broadcasting system throughout the tunnel, cameras at every 60 Mtrs etc.

Apart from reckless driving though, there are other and even more serious security concerns too which are being addressed. Himachal’s director general of police (DGP) Sanjay Kundu has said that each vehicle entering the tunnel is being checked for explosives and petroleum products and that one reserve battalion has been allotted to Kullu and Lahaul-Spiti district police for control and management of traffic and law and order in the tunnel.