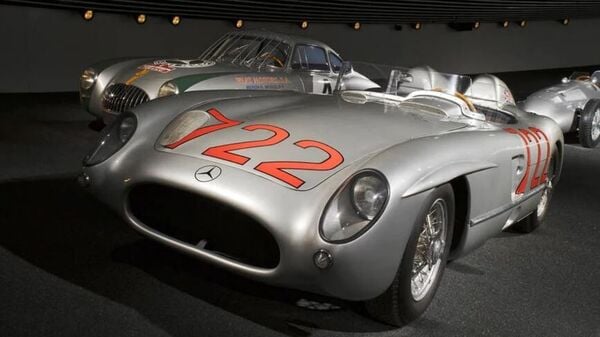 For $142 million, the 1956 Mercedes 300 SLR Uhlenhaut coupe has reportedly become the world's most expensive classic car, Hagerty reported. The price is enough to buy a dozen Lamborghini Aventador Ultimaes, and even the next Ferrari 250 GTO that is to come up for auction. While the report mentions that the news isn't confirmed, the sources at the publication have claimed that the infamous 300 SLR Uhlenhaut coupe has indeed become the world's most expensive classic car.

The 1956 Mercedes 300 SLR is just one of the two legendary 1950s cars that were built after Mercedes exited the racing scene in 1955. They earned the name ‘Uhlenhaut coupe’ after the head of the automaker's test department, Rudolf Uhlenhaut, started using one as his company car. The car was a road-legal racing car.

(Also read | Over 320,000 Mercedes SUVs under watch for potential brake failure in US, Canada)

Both the cars remained with Mercedes for all these years and were widely regarded as the most valuable cars in the world. However, last year, a select number of car collectors were invited to the Mercedes-Benz Museum in Stuttgart for an event, and that's when the fate of the 300 SLR was decided.

Mercedes-Benz wanted the purchaser to meet some criteria established by automaker. This included ensuring the car's future care and also that the buyer wouldn't simply flip the car for a quick profit. Further, the company wanted to ascertain that the custodian of the Silver Arrows racing car would keep it with the same care and attention as Mercedes has over all these years.

After this, one of the two 1956 300 SLR Uhlenhaut coupes is now allegedly in private hands. If this be true, the Mercedes car's value is double the record-setting $70 million sale price for a Ferrari 250 GTO back in 2018.