McLaren has added working accelerator with revving sound on the GT Ride-On along with brake pedal and brake light function.The functional dashboard gets workable controls with a key start and produces McLaren engine sounds when activated.
By : HT Auto Desk
| Updated on: 25 Jul 2021, 09:31 AM

Super car maker McLaren has introduced GT Ride-On toy model, its fourth car in the range of children's toy. It is modelled on the company's light and fast accelerating McLaren GT super car. Other ride-on models in the range include McLaren P1, McLaren 720S and McLaren Senna Ride-On cars.

Budding supercar enthusiasts from three to six years old can hop onto the Ride-On McLaren and discover the feeling of driving a super car of their own. The toy car features all the design and functional details of its bigger sibling such as working dihedral doors and functional storage compartment. While the dihedral doors allow for easy entry and exit, the storage has enough space to store all the driving essentials of the junior driver.

The dashboard of the McLaren GT Ride-On is functional too as it gets workable controls with a key start and produces McLaren engine sounds when activated. Junior driver can also enjoy some music while on drive thanks to the functional infotainment system that can play music by accessing files from a USB device or SD card. There is also an optional MP4 display screen. 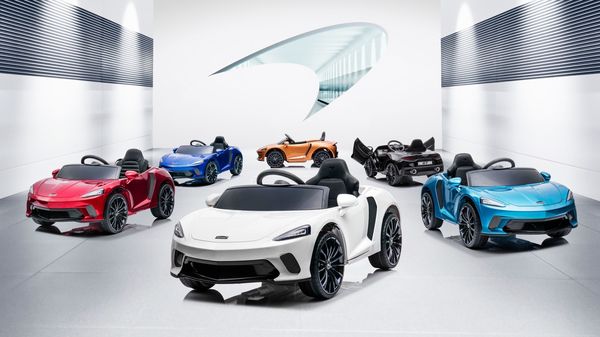 That's not all, to enhance the thrill for the junior enthusiasts, McLaren has also added working accelerator with revving sound on the GT Ride-On along with brake pedal and brake light function. "(McLaren) aims to inspire the future generation of supercar enthusiasts. We’re proud to develop and encourage younger minds and seek to create the next generation of drivers, engineers, and automotive designers," said Hayley Robinson, Merchandise, Licensing & Partnerships Manager at McLaren Automotive.

The McLaren GT Ride-On is available in six authentic colours - Burnished Copper, Silica White, Onyx Black, McLaren Orange, Amaranth Red and Burton Blue. The toy car is priced from £163.00 to £234.00, depending on options selected and is available to order from selected global toy retailers.