The new model is reportedly the last version of the Lamborghini Aventador.Lamborghini recently announced an investment worth €1.5 billion ($1.5 billion) for its electrification plans.
By : HT Auto Desk
| Updated on: 03 Jul 2021, 10:55 AM 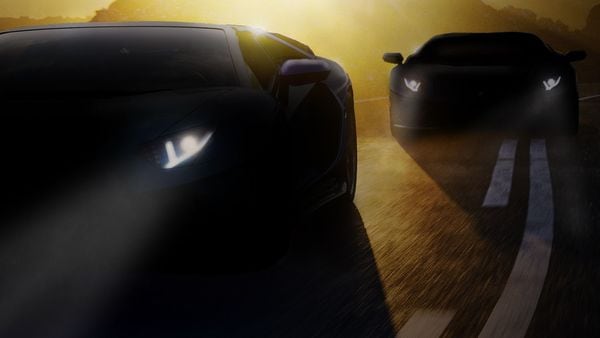 The newest creation from Automobili Lamborghini.

Automobili Lamborghini has revealed that it is going to unveil a new model on 7th July 2021. The luxury sports car maker teased the model on its social media handles, showing a pair of cars moving on a curvy road with their headlights on. The silhouettes more or less resemble Lamborghini's Aventador model.

As the picture is shadowed, to notice any other details is quite a task. If speculations are to be believed, this could be the last version of the Lamborghini Aventador called Aventador S Jota model. The new model could become the most powerful version of Aventador ever, Motor 1 reported. It could get a 6.5-litre V12 engine capable of generating a power of 769 horsepower.

Earlier this year, Lamborghini announced that it will bring two V12 models in 2021. Of the two models, one is likely to be the final version of Aventador while the other is expected to be its high-powered hybrid successor.

Lamborghini has successfully kept all the details under wraps, however, it is also being speculated that the upcoming new model will change in terms of powertrain and chassis to polish its performance further. Also, no details of its hybrid successor have been let out.

In May, Lamborghini had announced its investment plans that an amount of €1.5 billion ($1.5 billion) will be invested to take the brand towards hybrid and electric vehicles. This is the largest amount of investment the automaker has made to date. Lamborghini President and CEO Stephan Winkelmann had said that the company wants to shift its current models – Huracan, Aventador and Urus sport utility vehicle - to hybrid, petrol-electric powertrains by the end of 2024. However, if one is curious, an all-electric Lamborghini will not see daylight till the second half of this decade.