The owner lost his fleet worth almost half a million dollars in a matter of minutes.
By : Sabyasachi Dasgupta
| Updated on: 27 Jun 2020, 11:47 AM 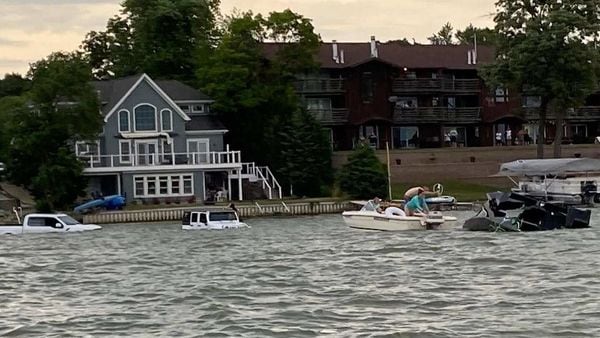 A daring rescue operation of a sinking boat ended in a disaster with a Jeep Wrangler and a Ford F-150 Raptor drowning in the process. (Photo courtesy: Facebook/@liftsladdersanddocks)

Imagine this: A person’s boat worth $300,000 started sinking in a lake, so he drives his Jeep Wrangler into water to pull it out. When the Jeep starts to float away he drives his Ford F-150 Raptor to save it and it also floats away.

If you are laughing, consider this too: In all, the person lost nearly half a million dollar worth of vehicles and vessel in a matter of minutes. Talk about bad luck!

The video and images of the whole incident that took place in Indiana, United States, went viral on social media. The incident happened last week at the Cedar Lake, where a man, identified as Jeff Bianchi, saw his boat sinking. Going by the person’s Instagram page updates, he bought the Parvati wake boat, worth nearly $300,000, in May. It was not clear why the boat started to sink in the first place. But what happened next was a comedy of errors.

Watching his expensive boat going down, the person first thought of pulling it ashore. He thought using his customised Jeep Wrangler was the best idea, instead of calling for help from authorities.

What he probably did not factor in was the depth of the Cedar Lake. With a maximum depth of 14 feet, the lake is a no-go zone for vehicles. In fact, no such all-terrain passenger vehicles could possibly have survived the depth.

Yet, the man tried to pull the sinking boat with the help from his Jeep Wrangler. Expectedly, the four-wheel vehicle started to drift away from the shore towards where the water is deep enough to sink it.

This led to the person’s second disastrous decision to deploy a Ford F-150 Raptor. He probably thought the pickup truck, with a very good record of pulling load, would be able to save at least the Jeep Wrangler, if not both the sinking vehicles.

Unfortunately, the Ford F-150 Raptor met the same fate of the Jeep Wrangler, and began to float away.

The video and the images shared on social media suggest that a separate attempt was made to rescue the sinking boat by deploying a ski boat. But evidently none of it worked. Surprisingly, the person owns a chopper too, which he thought not to use in this disastrous rescue operation. Otherwise he could have ended up losing millions. Also, the Jeep Wrangler he sank, reportedly belonged to his wife. We do not know how his better half reacted to that.