Ghosn, who led Nissan Motor Co. for two decades, has repeatedly said he is innocent. He said he fled because he believes he could not have a fair trial in Japan
By : PTI
| Updated on: 05 Jul 2020, 16:39 PM 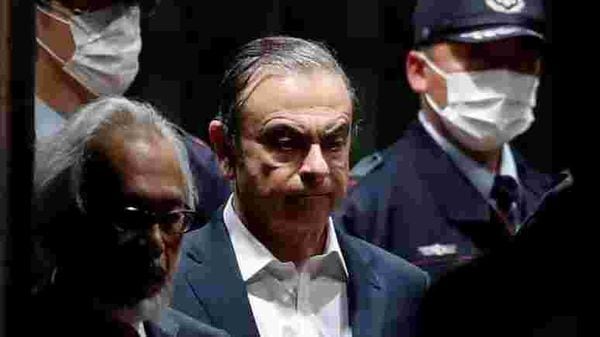 Tokyo prosecutors said Friday they have filed a request for the extradition of two Americans arrested in the U.S. for allegedly helping Carlos Ghosn, the former chairman of Nissan, flee Japan while he was out on bail.

“We express our deepest gratitude for the cooperation the U.S. authorities have shown to our request," the Tokyo District Prosecutors Office said in a statement.

“We plan to cooperate in all ways possible so the extradition procedures for the two can be carried out quickly," it said.

The completion of the extradition request does not immediately mean Michael Taylor, a 59-year-old former Green Beret and private security specialist, and his son Peter Taylor, 27, will be handed over.

Deputy Chief Prosecutor Takahiro Saito sounded upbeat about the prospects while stressing the decision was up to the United States. The request had to be filed within 45 days of the arrests.

Saito said Peter Taylor came to Japan last year and met with Ghosn at the office of his Japanese lawyer six times, including the day before Ghosn's escape.

“We believe that plotting the escape can be the only reason for his visit to Japan," he said.

If they are extradited, the Taylors will be arrested after reaching Japanese territory and then will be investigated, Saito said.

Suspects are held and interrogated without a lawyer present, sometimes for months, under a system critics call “hostage justice." Arrested in May in Massachusetts, the Taylors are accused of helping Ghosn flee to Lebanon in December while he was awaiting trial on financial misconduct charges.

Their lawyer has argued that jumping bail is technically not a crime in Japan.

Japanese prosecutors have brushed off that argument, stressing that Japan has arrest warrants out for the Taylors for allegedly helping a criminal escape, which is a crime under Japanese law.

Prosecutors have also been trying to bring Ghosn back to Japan, but Lebanon, unlike the US, does not have an extradition treaty with Japan.

Authorities say the Taylors helped sneak Ghosn out of Japan on a private jet with the former Nissan boss hidden in a large box.

Ghosn, who led Nissan Motor Co. for two decades, has repeatedly said he is innocent. He said he fled because he believes he could not have a fair trial in Japan.

He faced charges of under-reporting future income and breach of trust in diverting Nissan money for personal gain. He says the compensation was never decided on or received, and that the payments were legitimate.(AP) NSA