India will achieve 20% ethanol blending with petrol by 2023-24: Piyush Goyal

The ultimate target is to also have vehicles which can take up to 100% ethanol, Goyal said. The minister mentioned that the battery technologies are going to be very important for India's sustainability mission and for renewable energy to progress.
By : ANI
| Updated on: 17 Jul 2021, 08:57 AM 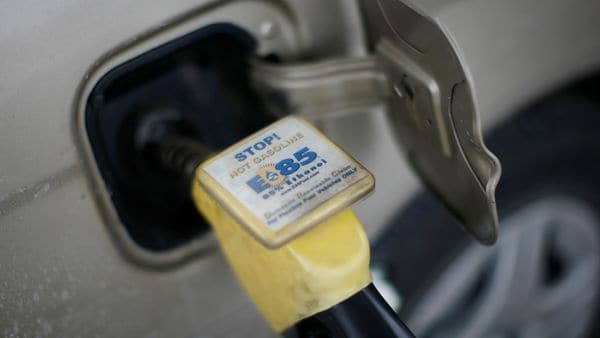 India will achieve the target of 20 per cent ethanol blending with petrol by 2023-24, said Union Minister Piyush Goyal in his address at the second valedictory session of Aatmanirbhar Bharat (Self-Reliant India) for Renewable Energy Manufacturing on Friday.

He said, "Our ultimate target is to also have vehicles which can take up to 100 per cent ethanol. Our idea is to make India conscious of its electricity needs being met in a more sustainable fashion and balancing the cost of electricity in such a manner that our developmental goals do not get affected. From an overall renewable energy target of 175 gigawatts (GW) by 2022, India is now looking at 450 GW by 2030".

Further, Goyal said, "We will encourage automobile users of electric cars to recharge their batteries using renewable energy or solar energy during day hours, for which we are looking at a big rollout of charging stations across gas stations in the country."

The minister mentioned that the battery technologies are going to be very important for India's sustainability mission and for renewable energy to progress. He added that the government is investing heavily in batteries now. "We are fully confident that India will play a leadership role in the area of renewable energy in the years to come," he said.

Dwelling upon the progress made in the country, Goyal said, "The hydro-power is in the initial stages, and we are already looking at the future and have started engaging in Hydrogen technologies. A Hydrogen Energy Mission in 2021-22 for generating hydrogen from green power sources has been launched."

Underscoring the LED Mission, Goyal said, "LED Lights have saved the country billions of dollars in electricity bills. As a nation, it brought down our carbon emissions by over 120 million tonnes every year. We were able to bring scale and rapidly roll it out all over the country."

Further, talking about the progress made by the country in renewable energy, Goyal said that several decades ago, India was amongst the initial countries to promote the hydro generation of power. The 1st small hydropower plant started functioning in Darjeeling way back in 1897.

He said that visionaries like Baba Saheb Ambedkar laid the foundation of an All-India policy with regards to the development of water and electric power.

"Next, India moved on to harness power from wind in a big way. Wind equipment was imported initially but as the volumes went up, we became one of the biggest manufacturers of wind equipment. Solar was the 3rd tryst with renewable energy," Goyal said.

Initially, the prices were very high and most people were not willing to engage with it. PM Modi, then CM of Gujarat, was one of the few leaders who recognised its potential and the fact that the world needs to move away from carbon, Goyal said.

Further, he added that India consciously decided to go for high volumes of renewable energy, which gradually led to the making of equipment in India. "As the import component kept reducing, the prices were brought down significantly. Because of the huge scale, we were able to get the world's best companies to invest in India and to get competitive pricing."

Goyal said that historically, Indian has always respected nature. "For us, environmental care is important because it is intrinsic to every Indian. Our culture, our traditional practices, our way of living reflects this consciousness. Waste is unacceptable to Indian households and the concept of recycling and reusing comes naturally to an Indian family," he said.

The minister added that our country is endowed with the blessings of nature in terms of rivers, sunshine, wind, monsoon etc.