Ford India had announced it will end production of its mass-market vehicles at its two production facilities in the country.The fate of plant workers as well as dealer partners in the country may be a limbo now.
By : HT Auto Desk
| Updated on: 16 Sep 2021, 02:39 PM 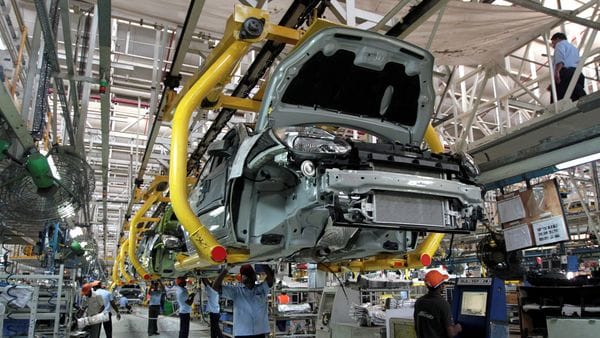 File photo: Workers assemble Ford cars at a plant in Chengalpattu on the outskirts of Chennai.

Federation of Automobile Dealers Association (FADA) has sought clarity from Ford India on how it plans to compensate its dealer network in the country. This comes exactly a week since last Thursday when Ford decided to pack up local manufacturing and offer only high-end vehicles via import route here.

Ford India had announced it will end production of its mass-market vehicles at its two production facilities in the country. One is located in Gujarat's Sanand while the other is near Chennai. The move, while being speculated upon for some time, came as a rude shock to the Indian automotive market and especially to the around 4,000 workers and the company's dealer network. Ford has said that while it will look after the needs of employees, dealers and customers, it was left with no option in the face of mounting losses amounting to billions of dollars.

But assurances alone aren't likely to calm frayed nerves. FADA has, perhaps therefore, sought some clarity. ""We would request you to kindly share with us the broad contours of the compensation structure, which you may have planned by now for compensating our members," FADA President Vinkesh Gulati wrote in a letter addressed to Ford India MD President and Managing Director Anurag Mehrotra, as per PTI. “This will not only help us in understanding the entire compensation process but will also assist us in hand-holding our members and ensure that the entire process is done in an amicable and justified manner."

In the letter, Gulati also refers to the Non-Disclosure Agreement (NDA) communication reportedly sent by Ford India to its dealers. "While dealing with confidentiality, one can understand in case the financials owing to the proposed exit, which gets discussed with each independent dealer, should remain confidential, the recitals to the NDA should hence carry a specific description of the nature of things which needs to be kept undisclosed," Gulati said. The NDA shared by the company should have clarity, he added.

The path already trudged by Ford in India may have been rough but the exit route isn't likely to be easy. Workers at its Chennai plant have already sought help from Tamil Nadu state government, appealing for help. There have also been sporadic protests with many demanding a central government intervention.