Of the 650 units to go on sale, half of these will be made available for purchase in the US, while the other half will be offered in Europe. The S1 Mosh/Tribute electric bicycle is a tribute to Serial Number One, the nickname for Harley-Davidson’s oldest known motorcycle built in 1903
By : HT Auto Desk
| Updated on: 20 Sep 2021, 11:40 AM 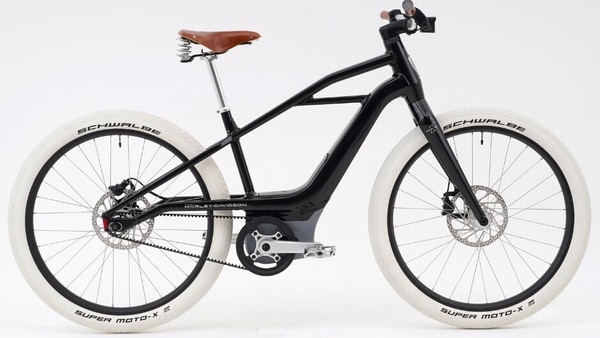 After unveiling its electric bicycle prototype in October last year, Harley-Davidson has now decided to sell a limited number of units of the vintage-looking e-bicycle. Sales of the production model of S1 Mosh/Tribute e-bike via Harley's electric bike company Serial 1, will be limited to only 650 units.

Deliveries of the bicycles are expected to commence later this year. While half of the model units will be made available for purchase in the US, the other half will be offered in Europe. The company has now opened pre-bookings for the model.

The electric bicycle is a tribute to ‘Serial Number One’, the nickname for Harley-Davidson’s oldest known motorcycle built in 1903. The electric bicycle's design is similar to the first prototype revealed by the company. Key elements include leather saddle and grips, brass accents, glossy paint, white tyres and brown drive belt.

The S1 Mosh/Tribute e-bike gets glossy black paint and honey-colored leather accents and comes with features such as Gates Carbon Drive belt, Brose mid-drive motor, TRP hydraulic disc brakes, internally routed cables and wires and integrated lighting. "The S1 Mosh/Tribute will serve as a springboard to launch our S1 Series that will see even more exclusive and highly-desirable Serial 1 eBike models in the future," the company's product manager Aaron Frank said in a statement.

Though Harley had not made it clear back in 2020 if it would put its S1 Mosh/Tribute e-bike up for sales, the current announcement is an indication that the company is still leaning towards its motorcycle roots by bringing out limited run editions in the competitive space.

The electric bike space in the US and Europe is crowded by players such as Specialized, Trek, Giant, Rad Power Bikes, Pedego, and X-Treme Electric Bikes. Harley also isn't the first motorcycle brand to make a shift to electric bicycles.