The 22-km long Gurgaon Sohna National Highway, which connects the two satellite towns in Delhi NCR, will be connected to the upcoming Delhi-Mumbai Expressway.
By : HT Auto Desk
| Updated on: 12 Jul 2022, 10:29 AM 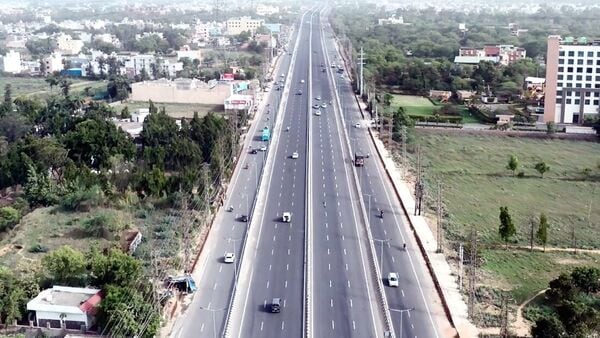 The 22-km long Gurgaon Sohna National Highway has been constructed at a cost of ₹2000 crore.

Travelling between Gurugram and Sohna in Haryana will now be a breeze for daily commuters after the Gurgaon Sohna National Highway was opened for public on Monday. The 22 km-long highway is expected to cut down travelling time between Subhash Chowk to Sohna to just 15 minutes, compared to almost an hour it used to take earlier. The national highway, which was constructed at a cost of around ₹2,000 crore, took almost four years to complete.

Union Minister Nitin Gadkari shared the first images of the new national highway on Twitter after it became operational for daily commuters. He said the national highway is a six-lane access controlled corridor with aggregate elevated section of about 7 kms. "For facilitating movement of local traffic, three-lane service roads have been constructed on both sides. The highway is being opened for traffic today. This section would also provide connectivity to Delhi and Gurgaon through Delhi-Mumbai expressway," said Gadkari on his Twitter post.

The construction of the Gurgaon Sohna National Highway, which began in 2018, was split in two sections. The 12.72-km section between Badshahpur and Sohna was the first one to be completed and made operational earlier this year on April 1. The remaining section, which connects Subhash Chowk and Badshahpur, was officially opened on Monday completing the entire 22 kms stretch of the national highway. Due to Covid-19 pandemic and lockdowns in two phases, the work on the national highway got delayed. It was supposed to be completed by 2020, but later the deadline was revised to June this year.

The Gurgaon Sohna National Highway is aimed to make travelling between Gurugram and Sohna free of congestion. The national highway will also be connected to the upcoming Delhi-Mumbai Expressway through an interchange at Alipur.