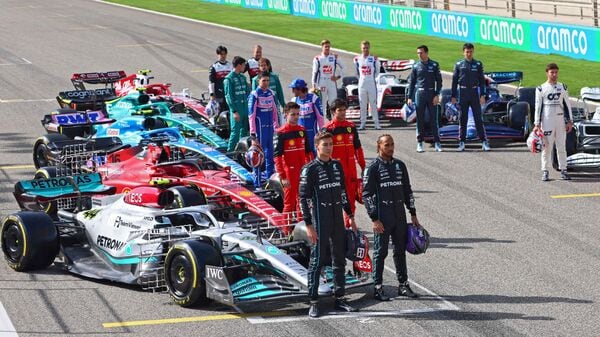 Drivers pose for a picture during the first day of Formula One (F1) pre-season testing at the Bahrain International Circuit.

Amid the ongoing Russia-Ukraine war, Formula 1 team Red Bull wants an urgent relook at the budget cap for all teams due to rising costs. Red Bull chief Christian Horner has said that there is an urgent need to discuss the matter as the F1 teams are facing high inflation, energy costs and interest rates which are financially weakening them. During pre-season testing at the Bahrain International Circuit on Friday, Horner said that jobs could be at risk as tightly-controlled budgets were eroded.

Formula 1 currently has a cap of $140 million budget every year per team. This cap does not include things like driver salaries. The budget cap has been brought down from $145 million last year. It is expected to drop further to $135 million next season. Red Bull was one of the teams which had to let go some of its staff last season due to budget constraints.

Horner said, "What you have to remember is when the budget cap was set back in the midst of the pandemic, in the middle of 2020, nobody could have foreseen the circumstances that we have in the world today. What we see going on in the world is only going to drive prices one way."

Red Bull is one of the biggest outfits among the Formula 1 teams which won the driver championship trophy last year with Max Verstappen. Being based out of United Kingdom, the team has witnessed inflation reaching its highest level since 1980s while energy prices too have soared.

"Inflation looks like it could hit record amounts. We’re seeing that impact already on things like air freight just to this event. I think it’s a very serious problem that we have to look at and address because this has a one-to-one impact on people’s jobs and livelihoods," Horner added.

"It's the duty of the regulator to look at this with a degree of urgency to make sure that the relief is put in place to take into account what's going on in the world with the cost of living increases that we're all going to see," said Horner.

Another UK-based F1 team McLaren echoed Red Bull's concerns over budget caps. "It's always important to apply common sense and with these additional challenges that came up in the last weeks and months in terms of inflation and so on ... I think it's important to simply have a discussion about it," said McLaren boss Andreas Seidl.

"We are absolutely up for that discussion ... open also to solutions or potential adjustments as long as everything is happening within reason," he added.

Formula One has a record 23 races this season, which starts in Bahrain next week, with rounds in the Americas, Asia and Australia as well as Europe and the Middle East.