Ford workers at the facility near Chennai fear for their future once the plant shuts and want the state government to provide them with alternate jobs.
By : HT Auto Desk
| Updated on: 15 Sep 2021, 10:47 AM 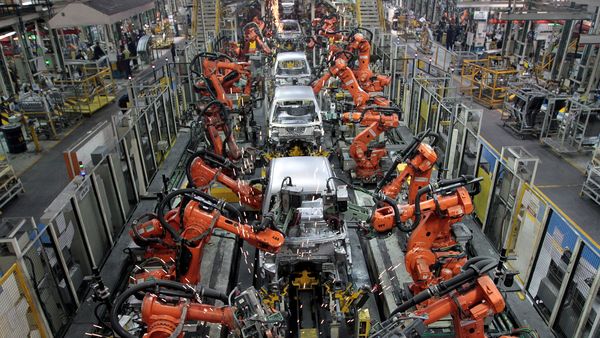 File photo: Ford cars are assembled at a plant of Ford India in Chengalpattu, on the outskirts of Chennai.

Ford workers may be left in a limbo in the aftermath of the American car company's decision to stop local manufacturing in India. While the company has stated that it will look out for its workers, dealer partners and customers, workers at its facility in Tamil Nadu have reportedly sought assistance from the state government to safeguard their jobs.

Ford India has decided to wrap its local manufacturing facilities in the wake of mounting losses. Its plant in Gujarat's Sanand facility will shut by fourth quarter of 2021 while the plant near Chennai will shut by second quarter of 2022. In all, it is expected that around 4,000 jobs would get affected by the decision.

Reuters now reports that workers at Ford India facility near Chennai have shot a letter to Tamil Nadu state minister T M Anbarasan asking for assistance. “Thousands of workers are at the risk of losing their jobs as a result of Ford's decision to shut its Chennai factory," the letter from the Chennai Ford Emloyees Union reportedly states, asking the minister to provide alternate jobs.

There have been isolated protests against Ford India as well with many demanding an intervention from the government.

Ford is now one of many US-based auto companies to have packed operations here. While it will now bring in high-end cars, including Mach-E electric vehicle, via CBU route, it is the end of the road for its mass-market vehicles like Figo, Aspire, EcoSport and Endeavour. Sales of these vehicles will stop once dealer stock is over. The company is assuring that existing customers will be taken care of as far as the vehicle service requirements are concerned.

The Federation of Automobile Dealers Associations (FADA), meanwhile, also informed it has been assured that Ford would look after its dealer network. “While trying to handle dealer anxiety, Ford India President and MD, Mr Anurag Mehrotra called me personally and assured that they will adequately compensate Dealers who continue to offer vehicle service to customers," said FADA President Vinkesh Gulati. (Read more here)

Ford Motor's journey in India began in the 1920's when it came to the country as a subsidiary of Ford Motor Company of Canada, before exiting in the early 50's. In 1995, Ford returned to India, this time in collaboration with Indian vehicle manufacturer Mahindra and Mahindra. Ford and Mahindra had severed ties in between, and Ford became Ford Motor India Limited in 1998.