Ford worker's union had sought a plant shutdown in line with the Covid lockdown in Tamil Nadu and also demanded medical expenses for employees who have tested positive.
By : HT Auto Desk
| Updated on: 28 May 2021, 03:15 PM 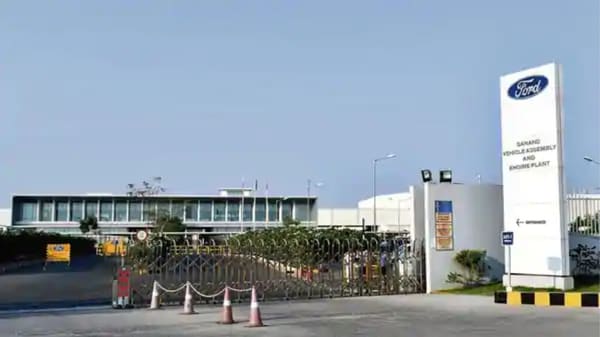 Ford Motor has decided to shut down its Chennai plant till May 29 amid lockdown in Tamil Nadu.

Ford Motor has decided to shut down its Chennai plant till May 29. The decision came into effect from today. The shutdown was announced a day after a group of workers at Ford India's facility in Tamil Nadu sat to protest demanding better health benefits amid the ongoing Covid-19 crisis.

Ford is the third auto manufacturing company based in Tamil Nadu to announced such temporary shutdown as the state continues to observe strict lockdown as the country continues the fight against the pandemic. This is the second such shutdown implemented by the US-based car manufacturer in India within days of the first one that took place between May 14 and 22.

The Chennai plant of the Ford Motor Company has an annual capacity of producing around two lakh units. The facility is key to the carmaker as it manufactures some of its best-sellers in India like the EcoSport and Endeavour SUVs.

Ford Motor said that it will engage with the union representative at its facility to sort out differences and find a solution. On Thursday, dozens of workers at Ford's Chennai plant staged a sit-in protest demanding paid leave and health benefits. "The safety of our workforce remains our topmost priority," a Ford India spokesman was quoted by news agency Reuters.

Ford is among the carmakers based in Tamil Nadu who have been facing similar protests by workers complaining about coming to work despite surge in Covid-19 cases across the state. In Ford Motor alone, as many as 230 workers were reported to have tested positive so far, and at least two have died.

Tamil Nadu, known as the Detroit of India, is under lockdown till May 31 as it remains one of the worst-affected states in the country amid the second wave of the virus with more than 30,000 cases every day. The state government had allowed some of the industries, including the auto sector, to continue work despite the lockdown.

The Chennai Ford Employees Union had shared a letter with the company's management a few days ago and had called for a shutdown of the facility until the lockdown restrictions are removed in the state. The letter, which was accessed by Reuters, sought compensation of ₹one crore each for the families of two workers who died due to Covid-19. The letter said, "The company should pay all medical expenses of workers affected by the coronavirus."

Earlier, Hyundai Motor and the alliance partners Renault and Nissan had announced similar shutdown till the end of the week amid similar protests their workforce.