Ford spokesman says the issue does not impact the functionality of the roof, but can cause unsatisfactory appearance.This announcement comes after Ford informed that the deliveries of its new electric Mustang Mach-E will be delayed by six weeks due to the global shortage of semiconductors.
By : HT Auto Desk
| Updated on: 13 Aug 2021, 11:33 AM 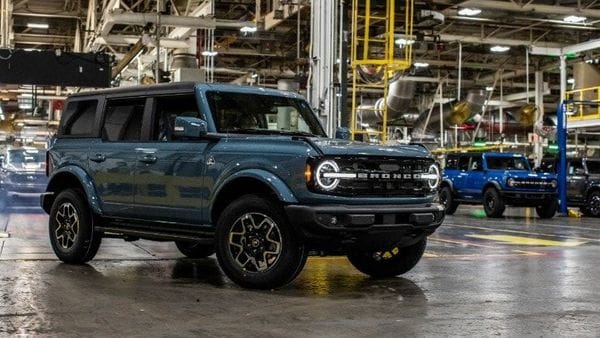 Ford Bronco SUV's launch has been delayed as the company has informed that it will replace all the hardtop roofs that it has manufactured so far. Ford has pushed the production of the new model to fix the issue.

Ford, in a letter to customers, has said that it has discovered that the roofs give ‘unsatisfactory appearance when exposed to extreme water and humidity.’ The automaker said that replaced roofs won't arrive until September. Meanwhile, Ford is holding thousands of already-built Broncos in parking lots near its Michigan factory as they await repairs.

In a report by Bloomberg, Ford spokesman Deep conveyed that the moulded hardtop roofs for two-door and four-door Broncos made by the Webasto AG supplier did not meet the brand's standards. “The issue does not impact the functionality of the roof, but can cause unsatisfactory appearance," he was quoted. This is the second setback related to the Bronco’s roof, being built by Germany’s Webasto. Earlier, Ford had to delay the launch of the Bronco because the supplier couldn’t get roof production up and running due to travel issues amid the pandemic.

Ford is currently prioritising replacement of the roofs on existing models of the Bronco, including those held in lots and those already in buyers’ driveways. That means some of the more than 125,000 orders for the revived SUV will be pushed to the 2022 model year. Production of those 2022 models won’t begin until December, said the spokesperson.

This announcement comes days after the company informed its customers that the deliveries of its new electric Mustang Mach-E will be delayed by six weeks due to the global shortage of semiconductors.