Ford's Michigan assembly plant that produces the Bronco and Ranger pickup will be shut in the weeks of July 5 and July 26.The loss of Bronco production is not due to the chip shortage or any issue with the removable roof but some other parts' shortages.
By : Bloomberg
| Updated on: 01 Jul 2021, 09:17 AM 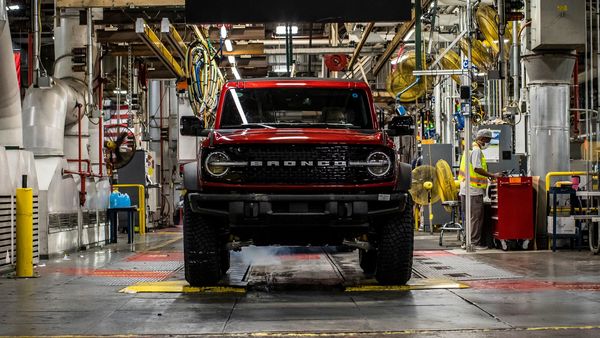 File photo: 2021 Ford Bronco SUV at the Michigan Assembly Plant in US.

The automaker also is curtailing production at eight additional factories in July and August due to the global shortage of semiconductors that has hobbled auto production worldwide. Ford said it is diverting its scarce semiconductor supply to finish nearly completed vehicles that are awaiting chips before being sent to dealers, whose lots are emptying out.

“We’re prioritizing completing our customers’ vehicles that were assembled without certain parts due to the industrywide semiconductor shortage," Ford said in an emailed statement. “This is in line with our commitment to get our customers their vehicles as soon as possible."

The loss of Bronco production, which is not due to the chip shortage, is a blow to the introduction of one of the company’s hottest vehicles. Ford said the Wayne, Michigan, plant that produces the Bronco and Ranger pickup will be shut the weeks of July 5 and July 26. Chief Executive Officer Jim Farley said this month that the automaker has received 190,000 reservations for the Bronco, and some 125,000 have been converted into orders to build the rugged new SUV.

“We have like a two-year order bank for Bronco," Farley said. “We have really great demand."

Ford declined to identify the parts that are shutting the Bronco-Ranger factory, but it does not involve the removable roof that caused a delay in the SUV’s launch.